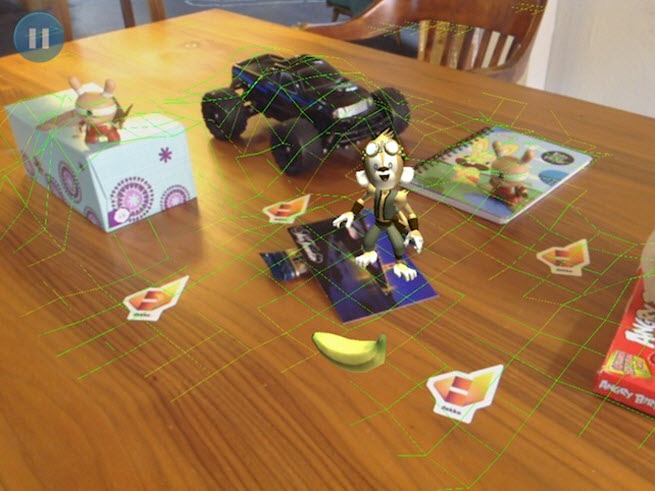 Dekko is launching an “operating system for the real world,” which is a fancy way of saying a new augmented-reality system. But Dekko has accomplished this in a clever way. While others put a digital layer on the real world, Dekko inserts animated images such as cartoon characters into the real world, where they can interact with it. The company is announcing this technology for the first time today.

San Francisco-based Dekko is also announcing that it has raised $3.2 million from Bessemer Venture Partners, Echo Ventures, and others. With the technology, you can point your tablet’s camera at a spot and then view an animated character walking around in the real world and interacting with it. You can use Dekko to see animated content in the real world — through a screen, not on a screen. Dekko says the tech can be used for everything from augmented-reality games to mobile tour guides. As pictured above, Dekko builds a digital grid over physical objects using 3D mapping. Then it lets loose animated characters — which you can control — in the 3D space.

“Dekko will help usher in a new generation of apps that work outside the confines of a mobile device, truly merging the experience with the user’s life,” said Matt Miesnieks, the chief executive officer of Dekko. “Previous attempts at this kind of tech have only provided the world with gimmicky, transitory experiences with no real value or staying power. We were promised the moon and given cardboard spaceships.”

Miesnieks told GamesBeat, “We are going to do both the OS and the applications. That’s because we’re trying to tackle the computer vision problems that have to be overcome here. We feel that augmented reality is a gold mine. A lot of people have gone into it, but no one has come out with a nugget yet.”

With Dekko’s software running on top of a tablet, smartphone, or other device, your mobile camera can be used to reconstruct the environment and track animated content within it as it moves about in real time. This allows mobile devices to visually interpret the real world, making possible apps for games, social networks, and travel. While first-generation augmented-reality apps fell short, Miesnieks hopes to fulfill the dream started by the pioneers by being the visual layer for a wave of new wearable computing devices. It could, for instance, be the digital layer for gadgets like Google Glass.

The company was formed in 2011 on the bet that people would want to see animated content not just on a screen but in the real world. There are no competitors per se, but similar projects are being pursued at SRI and Qualcomm. Miesnieks and his wife started the Dekko to build the operating system and apps running on it.

Miesnieks said that the company is working on a proof of concept game called Dekko Monkey, and it is in talks with other big companies that want to create cool mobile apps to show off their devices.

A lot of the work has never been done before, like blending light from the real world with lighting in an animated augmented-reality environment. The technology also has to scale better. Right now, the company can map a real-world area of 10 feet by 10 feet. But Dekko wants to grow that map to include buildings, streets, and cities.

Another challenge is that Dekko will have to partner with some big companies to bring its full vision to the market. Miesnieks wants to merge mobile technology with the real world in unprecedented ways, building digital grids with physical objects and 3D mapping.

The operating system is a shift from apps that operate inside the constraints of a mobile device to apps that (appear) to run outside of the box. Dekko may start with the ability to instantly map an area the size of a table, but it will eventually be able to interpret whole rooms, streets, and cities using 3D mapping.

“Much like iOS marked the shift from feature phones to smartphones, Dekko’s goal is to be the OS for the wearable computing generation,” said Miesnieks. “Dekko will usher in the next wave of mobile by providing developers with a stunning 3D visual layer for wearable devices.”

Dekko has hired specialists from the fields of augmented reality, optical tracking, 3D reconstruction, and user-experience design. The team’s background includes top experts from academic research, Xerox PARC, Twitter, Layar, Electronic Arts, and the New York Museum of Modern Art. The company is currently in talks with the top tier of hardware manufacturers.

Dekko is currently in talks with the top three tier-one hardware manufacturers. It is also creating its own app in the form of Dekko Monkey, where a monkey interacts with the world in real time. You don’t need something like a QR code to interact with the real world. The company hopes to get products out by this summer.