At its I/O 2018 developer conference today, Google rolled out a new app model for Android and revamped Google Play distribution options for developers. The goal? To make Android apps modular and smaller.

Google Play has over 1 billion monthly active users, which the company argues makes it “the world’s largest app distribution platform.” Last year, Google Play users installed apps 94 billion times, the company revealed today. That number is up from 82 billion in 2016 (a 15 percent increase), but growth has slowed: The number was at 65 billion in 2015.

Android product manager Stephanie Cuthbertson shared the progress onstage today. We talked to her ahead of her announcements to understand what spurred these changes. 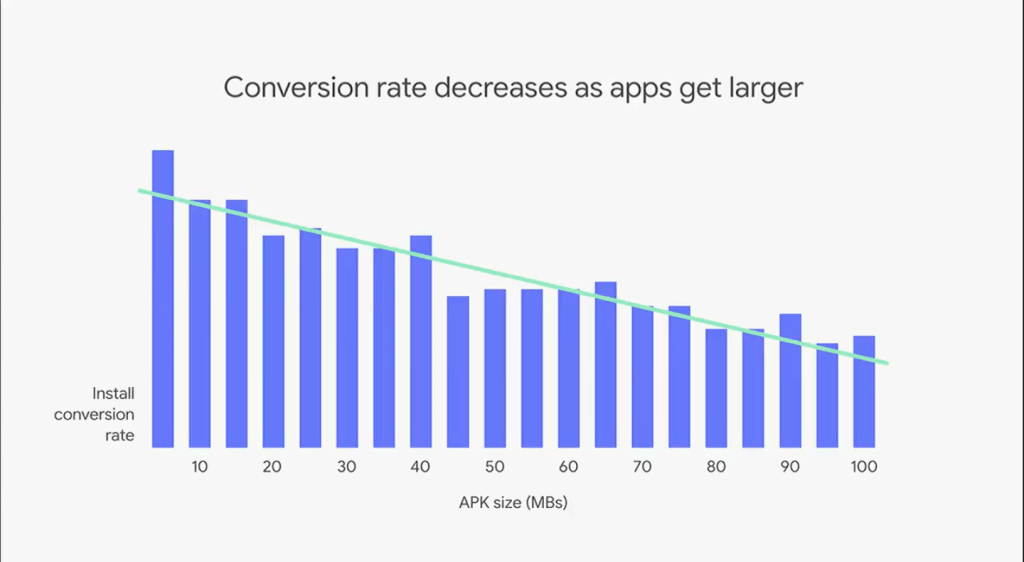 “Android has been growing, which is great. App sizes are also growing, which is not great,” Cuthbertson told VentureBeat. “Apps are targeting more people, they’re in more countries, which also means more languages, more resources, more features. And the problem is that we know the larger an app gets, the [fewer] installs it gets. Most people think that’s true in emerging markets, but it’s actually true in all countries. How can we make it easy to build small apps? The best idea we had was actually a hard one for us. It meant re-architecting our entire app serving stack.”

The Android App Bundle is a new publishing format, available today, designed to reduce app sizes. In Android Studio, you will build an app bundle that contains everything your app needs for any device, including languages, device screen size, and hardware architectures. The outputted app bundle includes all the required metadata and the APK.

Google Play is where the magic happens. All the work is done on the server side so that when a user downloads your app, Google Play’s new Dynamic Delivery will only serve the code and a subset of resources matching the user’s device. As a result, users will see a smaller install size on the Play Store, can download apps more quickly, and will also save space on their devices.

What kind of savings are we talking about? Cuthbertson said size reductions can vary dramatically, but she gave three examples of notable gains: LinkedIn saved 23 percent, Twitter saved 35 percent, and Jomo saved 50 percent. Best of all, Dynamic Delivery works on 99 percent of Android devices (ICS and higher).

Furthermore, the Android App Bundle enables modularization so that you can deliver features on demand, instead of during install. It’s launching in beta today (join the program), and  will allow developers to build dynamic feature modules in the latest Android Studio 3.2 Canary and publish them on Google Play.

“The real exciting part of the App Bundle is that apps are moving to be modular, which is giving us a huge space savings,” Cuthbertson explained. “The other part is Play Dynamic Features, which is taking the idea that a lot of apps have features in them that maybe only 1 percent of users use, maybe like a call center. With Dynamic Features, a developer can opt to only optionally load those. This really enables radically smaller apps. You can imagine an app that only contains the code which is used by the majority of users, and then additional features are loaded on demand.”