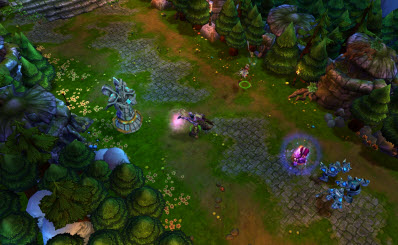 Riot Games has raised $8 million in additional venture capital for its online fighting game. The investment was led by Chinese social media giant Tencent, which plans to publish the game in China.

The Culver City, Calif.-based game startup is creating League of Legends, a game where you can create your own fantasy character and challenge others to an arena duel. It combines quick-hit online game play with fantasy elements that appeal to hardcore gamers. The company has 50,000 users in a closed beta test now and plans to formally launch in October.

Besides Tencent, investors include Benchmark Capital and FirstMark Capital. To date, the company has raised more than $20 million, a hefty sum for a game firm. Brandon Beck, chief executive, said in an interview that the company needs the money to launch its game and continue enhancing it as a service.

“Our aim has been to create a quick online experience that takes advantage of new business models but has the production values of a traditional console game,” Beck said.

Beck said the company intends to deliver the game as a service. Whereas store-bought games have a beginning and end, online games can go on forever as developers keep adding more content. League of Legends will continue to add new kinds of fighting modes and arenas.

The game is a free-to-play game, meaning players can start playing for free. If they want to decorate their characters or buy time-saving features, they have to pay. Riot was able to set up the virtual goods system in a deal with Fatfoogoo, a virtual goods and electronic commerce platform maker. With Fatfoogoo, the company was able to add two kinds of currency: one that you can earn through experience, the other that you can buy with real money. Games with these dual currency systems are considered more fair, since rich players can’t entirely buy their way to victory. Players can spend the currency in the game’s store, where they can buy a variety of items.

Mitch Lasky, a partner at Benchmark, said in an interview that the investment was attractive because the company had created an addictive game that players could revisit again and again with endless variety. The risk is that players might get bored with this kind of repetitive game play.

This game is like a pickup basketball game, where you find others to play with online and then fight against each other in matches with as many as six players on each side. The inspiration for the game is the free “mod,” or user-generated modification, dubbed “Defense of the Ancients,” a popular version of “Warcraft III” that has an estimated 10 million players. That game has its limitations and so Riot Games decided to make a better, brand new game on its own.

The art of the game is highly stylistic, in contrast to more realistic games. Players will assume the identities of wizards, known as “summoners,” and will have dozens of champions which they can conjure to fight in a variety of battlegrounds. Summoners can carry their talents from game to game, but the champions start anew with every session. It’s kind of like a battle fought between characters in World of Warcraft, except there is no virtual world.

Lasky said one of the byproducts of the recession is that virtual worlds — which often require huge teams and lots of artists — have fallen out of favor somewhat. He said that games have not proven as recession resistant as everyone thought, but game companies are still prospering if they combine innovations in game play and business models.

“They nailed a model where you combined the game play of a hardcore game with the monetization of casual online games,” Lasky said. “When you go after serious gamers who pay $60 for a game, you have to realize that they have a certain expectation for game quality. The deal with Tencent validates the progress the company has made toward this goal.”

Riot now has 40 employees and is adding more on its publishing side. Most of the developers have worked on hardcore console games in the past. Beck said it has been easy recruiting in part because the developers get to share in the rewards if the company is successful, as with any startup.

The relationship with Tencent is important because it has more than 400 million active users of its QQ instant messenger client, which is used to access all sorts of games and other digital goods services. The game will launch first in the U.S. and Europe and then it will expand to Asia.

Other midsession games — those with short game sessions — include rivals such as Electronic Arts with its Battlefield Heroes online game and Challenge Games, which operates arena fighting games such as Duels and MechDuels. Another rival could be Starcraft II, the long-awaited sequel coming from Blizzard Entertainment. But that game has been delayed until next year, giving Riot Games a much-needed opportunity, Lasky said.