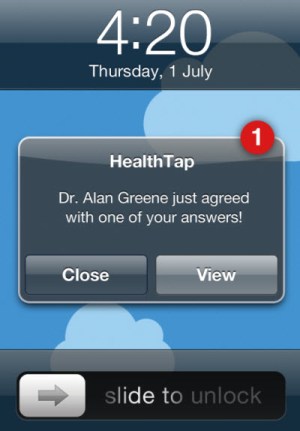 HealthTap has raised $11.5 million in a first round of funding to expand its expert online physician community, which answers questions that patients pose online or via smartphones.

The backers include Google chairman Eric Schmidt’s Innovation Endeavors fund and Mohr Davidow Ventures, while Mayfield Fund led the round.

Palo Alto, Calif.-based HealthTap’s interactive health network started just two months ago and it already has more than 6,000 doctors and 500 healthcare institutions. Patients ask questions and physicians answer them. That by itself is pretty mundane. But HealthTap motivates the doctors to stay engaged because it rewards them with a better reputation and peer recognition.

Ron Gutman, chief executive of HealthTap, said in an interview that the idea for company came about because searching for authoritative health information on the internet is a frustrating experience since users don’t trust the answers they find. Doctors can be much better at answering direct questions, but they are notoriously busy and technology-phobic.

“The goal is to transform healthcare in this country,” Gutman said. “People who use the internet for health information find it useless because they don’t trust it. There are 1.2 billion health searches every month, but the real trusted information comes from doctors.”

HealthTap “gamifies” the process of answering questions, giving the physicians reputation points for their answers. On top of that, physicians can simply tap a button on a mobile phone if they agree with an answer that another doctor gave. Doctors who earn a lot of “agree” buttons can grow their standing among peers.

In the network, anyone can ask health questions online or on a mobile app. They can get answers from U.S. doctors across 100 specialties for free.

HealthTap will use the money to accelerate growth, recruit talent, and engage more physicians and patients in its online HealthTap community.

Tim Chang, managing director at Mayfield, said in an interview that Gutman has a track record of working for seven years in the field, dating back to work he did at Stanford University. Chang said that no other service has gotten doctors so engaged in answering questions and the reason is the “gamification of health.” The physicians stay engaged because they enjoy giving answers, getting rewards, and getting peer recognition. And the network taps mobile apps, which make it easy to respond.

“The ‘aha’ that caused me to invest is not just Ron’s vision for health 2.0 and gamification,” Chang said. “It was also that he was able to get doctors to care in a way that no other startup has been able to.” 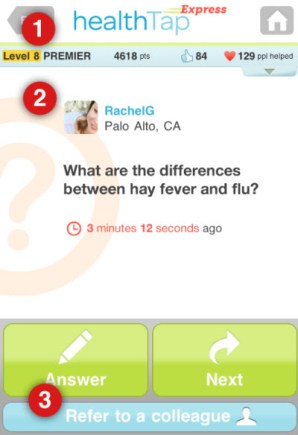 In the past, drug companies often tried to bribe doctors with money. But HealthTap also taps into the same kinds of motivations that keep people playing games. The apps feed the doctors’ pride, altruism, and vanity.

“We call this the virtualization of healthcare,” Gutman said. “Instead of using strangers to do crowdsourcing, we call this ‘trust sourcing.'”

Gutman said that all physicians undergo background checks to participate on HealthTap, verifying their medical licenses and good standing in terms of lawsuits or complaints. Approved doctors get a free “virtual practice” from which they can lead an online health conversation. They can also make connections to get new patients for in-person care.

HealthTap was founded in 2010. It launched its beta apps a few months ago with expert discussions focused on pregnant mothers and pediatricians. Then it expanded to 100 different specialties where patients can ask questions 24 hours a day, seven days a week. The information is free.

HealthTap has 12 employees. The competition is doctors and hospitals who work in traditional ways. Participants include the big providers such as Cleveland Clinic and The Mount Sinai Hospital, as well as small practices across the nation like Women’s Care of Beverly Hills Medical Group, to individual physician offices such as the one run by Robert Kwok in Saratoga, Calif.