As Sen. Barack Obama barnstormed the primaries in 2008 on his way to the Oval Office, his youthfulness and ever-present BlackBerry became symbols for many in Silicon Valley that the nation might finally have its first real technology president.

Eight years later, with hair gone grey and the BlackBerry now a relic, President Obama used the occasion of his final State of the Union address last night to cement his technology legacy. He summarized a list of tech-based initiatives and listed technology as one of the four greatest questions facing the future of the nation — and the next president, specifically.

“How do we make technology work for us, and not against us, especially when it comes to solving urgent challenges like climate change?” Obama asked.

Obama has indeed made technology a centerpiece of his agenda, though not always to the degree that Silicon Valley wanted, or in the ways that its leaders wished. Issues like Net Neutrality remain largely unsettled, and the result of patent reform is yet unknown. The impact of the laundry-list of programs the president launched will  also likely not be known for years.

And yet, it’s quite possible that for all his accomplishments, Obama’s presidency may always be overshadowed by the black mark left behind by the Snowden revelations. Though the government’s digital snooping programs preceded his presidency, their disclosure and the lack of clear actions to halt them have rekindled people’s fears that all their shiny new Internet-connected gadgets are being used to spy on them.

This has forced Silicon Valley companies like Google, Apple, and Facebook to grapple even more actively with people’s privacy concerns. Perhaps that’s as it should be. But there is a level of trust that has been broken that may prove difficult to repair.

Worse, that mistrust of U.S. tech companies has spread across the globe. Even now, in Europe, governments and the European Commission are taking steps to wall off residents’ data to keep it out of the hands of U.S. spy agencies. That impact falls directly on international tech companies, which are increasingly seen abroad as funnels into National Security Agency servers.

More fundamentally, the Snowden revelations drove a wedge into the debate about whether technology should be viewed with optimism or fear, the latter gaining the upper hand at the moment. The last thing we would want is a fear of technology as we enter an era when artificial intelligence, robots, and self-driving cars are becoming reality. Alas, that is where we are.

Which, again, is too bad because Obama has tried to project an air of techno-optimism, both in actions and in spirit.

His campaign and administration gave Silicon Valley and the tech industry, in general, a boost by gleefully embracing every social media channel that came down the pike.

From joining Twitter early on to jumping on Snapchat just two days ago, making Spotify playlists for his campaign or doing a Reddit AMA, Obama plunged fearlessly into the digital melee. Despite sometimes experiencing racist backlash, Obama seemed to fully endorse the idea that these were essential new tools that could create positive, new ways to engage people.

His campaign also broke new ground with its use of big data to drive its agenda. And in his administration, Obama made big strides toward having open data as the default setting for the U.S. government. He hired the nation’s first chief technology officer and launched Data.gov, which now has 200,000 data sets.

On the energy front, he can rightfully brag that solar and wind industries have come a long way under his presidency (though people will likely disagree about how much credit he deserves).

Certainly, government loans to companies like Tesla, though once controversial, seem like smart bets, in retrospect. On the other hand, a similar loan to Silicon Valley’s Solyndra dogged Obama in his first term after the company went bust.

Obama culturally championed the idea of science and innovation and entrepreneurship throughout his tenure. Whether it was hosting a White House Maker Fair or offering support to the kid in Texas arrested for bringing a clock he made to school, Obama made clear his belief in founders and scientists. 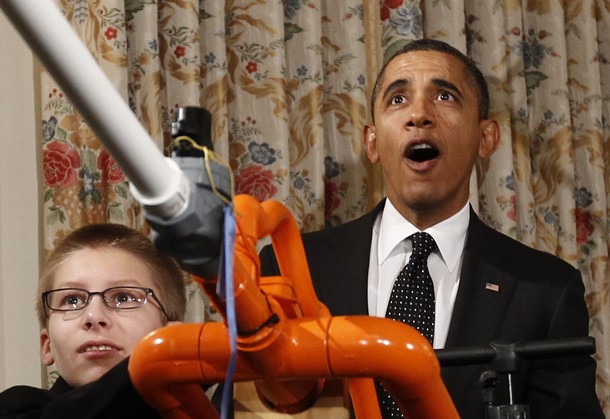 Above: U.S. President Barack Obama reacts as Joey Hudy of Phoenix, Arizona launches a marshmallow from his Extreme Marshmallow Cannon in the State Dining Room of the White House during the second White House Science Fair .

“America is every immigrant and entrepreneur from Boston to Austin to Silicon Valley racing to shape a better future,” Obama said last night.

His efforts to add to his legacy include a new program announced last night for “offering every student the hands-on computer science and math classes that make them job-ready on Day One.” And on Thursday, Obama is expected to announce a new initiative to boost self-driving cars.

Looking ahead, it’s hard to see a candidate among the multitude of Republican and Democratic presidential hopefuls who is likely to embrace technology as much as Obama has.

Certainly, every political campaign team strives to be social media savvy and data rich. And you can expect most of the candidates to give technology issues lip service in the coming months as they plunder Silicon Valley for campaign donations.

But for the moment, with his imperfections and stumbles, Obama can easily claim the mantle as the nation’s first tech president. It’s just too bad that his legacy will always be clouded by the lingering fear and distrust of the future that also grew during his tenure in the White House.