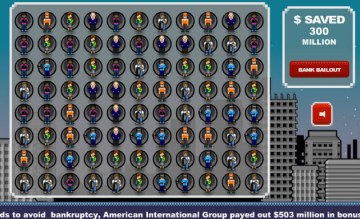 While strong sales of Modern Warfare 2 are helping Activision Blizzard’s sales this holiday season, the rest of the video game industry may be preparing for the worst. The question on everyone’s mind is whether December sales will come in strong enough to buoy the industry’s big companies.

Sales may not be dire. But already, some heads are rolling. Atari announced today that it replaced chief executive David Gardner with his No. 2 executive, Jeff Lapin. Atari has had a rocky time, but it is preparing for a big launch in January of its Star Trek Online property, being developed by Cryptic Studios. In this survival of the fittest environment, layoffs are hitting the weaker companies.

Also, MTV’s Harmonix division laid off 39 people, or 13 percent of its staff in Boston. The company said the move wasn’t due to poor sales of the company’s flagship release, The Beatles Rock Band. (But sales for that title are weak; after much hype, it didn’t make the top 10 selling games list in November.)

Electronic Arts is also in the midst of cutting 1,500 jobs, partly because it was working on too many games, and many of the new titles were not hits. EA’s Redwood Shores studio, Maxis, Pandemic, and Tiburon studios took hits. Take-Two Interactive hasn’t cut jobs, but it did report a revenue and earnings shortfall for the period ended Oct. 31 and predicted sales would be weaker than expected going forward because of product delays. 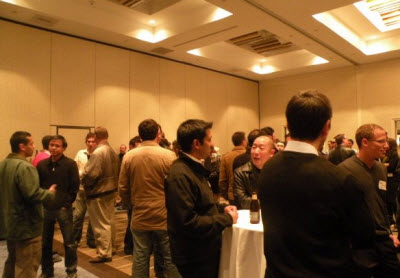 Some of this is good for rivals. Social gaming firms like Zynga are hiring like crazy. Bill Mooney, a vice president at Zynga, said this week that the company has more than 600 employees now. That means Zynga has hired hundreds of employees this year.

Last night, I went to a party (pictured) in Redwood City, Calif., for game industry folks thrown by game entrepreneur Frederic Descamps. The place was buzzing with entrepreneurs starting new social game studios and venture capitalists. That reminds me of the theory of creative destruction, where one part of an industry is falling apart and another part is booming.

Venture capitalist Tim Chang said at the party that social game companies are the hot ticket now and his inbox is full of resumes from people who work in the traditional console game industry. Meanwhile, lots of developers who have lost jobs are trying their hand at creating iPhone games, which can be done by small teams on shoestring budgets.

As an example of layoffs leading to job creation, Activision Blizzard has started a new studio in Foster City, Calif., not far from where EA has its headquarters, and has hired former EA executives Glen Schofield and Micheal Condrey to run the group, dubbed Sledgehammer Games. And THQ, which laid off hundreds of developers this spring and last fall, announced it would build a game studio in Montreal, thanks to Quebec government subsidies.

December sales are expected to be robust. But predictions of growth for video games have gone awry all year long. In November, sales were 7.6 percent below last year’s numbers (NPD numbers), even though analysts predicted growth. If December sales are disappointing, the knee-jerk reaction of game publishers could be bad for employees. Last year, after the financial crisis struck and the recession set in, game publishers shut more than 60 development studios and publicly announced cuts of more than 8,452 jobs during the second half of 2008 and in the early part of 2009. That was an estimated 12 percent of the industry, according to analyst Wanda Meloni of M2 Research.

Since that time, Meloni said there have been an additional 2200 layoffs, mostly occurring between October 2009 and December 2009. There were also three more game studio closures, bringing the total number closed this year to 15.

“The upside is that with the announcements coming from Canada there will be a gain of 1500 jobs, but those will be over the course of the next four years,” Meloni said. “I think the biggest thing here is that these layoffs are primarily at studios focused on traditional gaming – traditional genres, on consoles. Publishers are shedding the studios and projects that no longer offer long term revenue streams for them.”

[Image credit: from our story last year on a video game about layoffs]