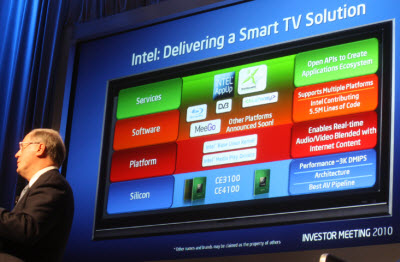 As TVs become connected to the web, they’re undergoing a transformation. They can display web pages on the screen. But that’s just the change on the outside. On the inside, they’re becoming computers.

This year’s models of web-connected TV sets come with about 10 million lines of software code, about 10 times the amount in older TVs. Those new TVs have about triple the computing performance of the older TVs, according to Paul Otellini, chief executive of Intel, speaking at the company’s analyst meeting today.

The same is happening to all sorts of gadgets, from car navigation devices to smartphones, from home energy management systems to digital signs in stores. Dumb things are getting smarter. That means they will become platforms for ever-changing services and apps. 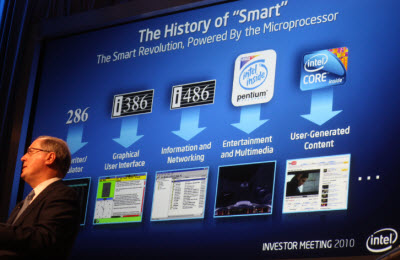 Intel argues that this transition will play into its hands. Otellini expects that it will be shipping a billion chips a year within five years. Only about 700 million of those will be shipping in computers. Another 300 million will be going into devices where Intel hasn’t played much: smartphones, TVs, car navigation systems, digital signs, portable gadgets, and home control devices.

To succeed, Intel will have to take market share away from the leading low-power microprocessor design firm, ARM, and its many licensees that design chips using ARM’s basic architecture. While Intel has shipped 3.3 billion cores (or computing brains, with multiple cores on a chip these days) during its history, ARM licensees ship multiple billions of chips per year already, thanks to their use as the primary brains in cell phones. 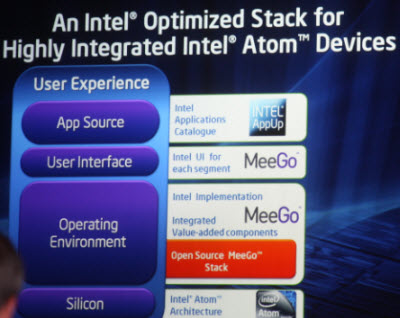 Last week, Intel launched the latest generation of its Atom microprocessors to go after ARM’s core market in TVs, consumer electronics gadgets, tablet computers and smartphones.To break into the market, Intel has created its own operating systems (via its Wind River embedded software acquisition last year as well as its own MeeGo Linux-based operating system) to make it easier for customers to adopt Intel’s hardware designs. MeeGo, built from a combination of Intel’s Moblin version of Linux and software from Nokia, will be used across a number of device categories powered by Atom chips. Atom chips will run not only on MeeGo, but Android, Google Chrome, and Windows devices too.

Intel has launched a big software development training program for the Atom chips. Since the launch of the original Atom chips a few years ago, there are more than 240,000 programmers working on code related to Atom processors, said Renee James, head of software at Intel. Otellini said, “Anyone who wants to compete with us here will have to do software.” 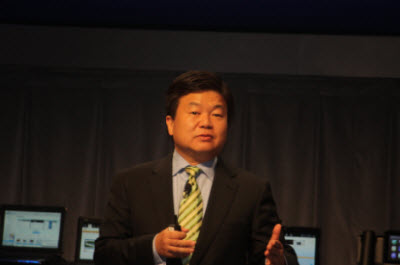 Intel began shipping its Atom Processor CE 4100 chip for smart TVs in December. Eric Kim, head of the company’s digital home business, said that various TV service providers have begun trials with Intel-based digital set-top boxes. Trials with multiple companies have been completed and commercial deployments are happening in the second quarter. France Telecom, Telecom Italia and a number of others are deploying boxes with Intel’s chips.

Intel is gearing up for a massive retail product and service launch this year, Kim said, but he declined further comment on that.

“This convergence of computing and TV has been talked about since early 1990s, but it hasn’t happened,” Kim said. “Today, when you go to the store, you can see many TVs and Blu-ray players that have internet connections. We think that TV is the next major frontier of inovation.”