Berlin-based startup factory Rocket Internet recently promised to produce 10 more startups each year, starting in 2015. And it looks like it’s striving to finish 2014 the way it plans to tackle the new year.

After a spate of launches across the continent over the past few months, Rocket Internet is rolling out its latest startup in four European countries, after the “groundbreaking success” of the launch in one country.

Nestpick is setting out to “revolutionize the rental market for a new generation,” as it puts it, starting today in the U.K., France, Italy, and Spain — in addition to the Netherlands where it launched a few months back. It will be expanded to more markets across Europe and further afield too.

The startup is aiming squarely for the younger demographic, with a focus on mid-term accommodation for international students — so, from around three months to three years. The platform is being pitched at both landlords and tenants, as it looks to match the needs of accommodation-seekers arriving in a new city with empty rooms.

Nestpick essentially serves as the middleman, managing the communications and security checks, with tenants lodging their deposits directly with Nestpick, which retains the money until the tenant has moved in and gives the go-ahead to transfer to the landlord. 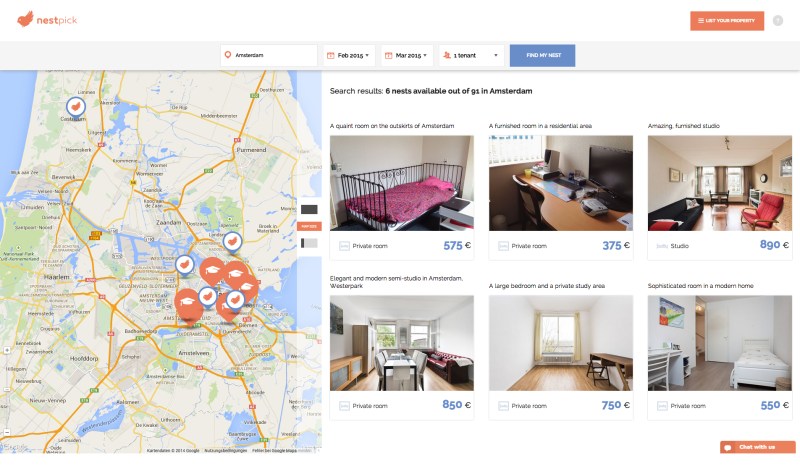 While the likes of Airbnb have proven themselves as useful tools for those arriving in new locations for the first time, it seems Nestpick is looking to capitalize on this demand with something specifically for the longer-term needs.

But why the U.K., France, Spain, and Italy, specifically? Well, their main target market initially will be locations with a high concentration of international students, and the aforementioned countries rank highly on that front.

Rocket Internet has something of a track record in replicating the success of companies from key markets in new countries. For example, its Homejoy-esque Helpling cleaning service just raised $17 million, while its Lazada Amazon clone snapped up a staggering $250 million.