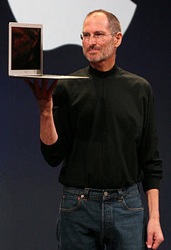 Apple has released some of the details about the keynote address for its Worldwide Developers Conference, which will be at 10am on Monday, June 8. The big news: Senior Vice President of Product Marketing Phil Schiller will give the keynote, not chief executive Steve Jobs.

Now, that’s not exactly a huge surprise — since Jobs wasn’t announced to return until late June from his health-related absence , a Job-less WWDC seemed like a possibility once Apple announced WWDC would run from June 8 to 12 . Still, Jobs’ absence takes some of the luster off the event, especially since there’d been hope that a big, important announcement would bring him back early. This news either suggests that the announcements at WWDC will be relatively underwhelming or that there’s still uncertainty about Jobs’ health, or both. Plus, VentureBeat writer Dean Takahashi says Schiller just isn’t as good a speaker .

As for the actual content of the speech, Apple doesn’t mention anything about the rumored redesign of the device, and it says the conference will focus on the upgraded iPhone 3.0 operating system and its new Snow Leopard operating system for Macs. Of course, there’s still a chance the company could surprise us, but Financial services company Piper Jaffray’s Gene Munster says the Schiller keynote is consistent with his prediction of a special Apple event late June or early July to launch a family of iPhones — which would presumably include some sort of cheaper "iPhone nano."

Of course, one of the reasons Munster predicts that is because many analysts think Apple needs a cheaper iPhone, just as they think Apple needs a more affordable laptop or netbook. And Apple may agree, but as VentureBeat writer emeritus MG Siegler has argued before, it will only offer a cheaper product on its own terms. (Apple’s Tim Cook recently repeated his concern that manufacturing a netbook would require Apple to sacrifice too much quality , and Apple also just struck back against Microsoft’s Laptop Hunter commercials , which encapsulated that "cheaper is better" sentiment, with a commercial of its own.)