In this case, Blazkowicz is passing down the talent of kicking Nazi butt to a new generation. I’ve been a big fan of the Wolfenstein alternative history games, Wolfenstein: The New Order, and Wolfenstein 2: The New Colossus. The super-charged testosterone of Blazkowicz as he tears through the Nazis in an alternate history universe where the Germans won World War II.

I played a single-player level and then engaged in a two-player co-op mission. It was very frenetic fighting, but I began to see how the sisters worked together, with one of them going stealth and the other distracting one of the particularly difficult bosses.

Then I spoke with Jerk Gustafsson, executive producer at Machine Games. We talked about how the new characters project a sense of humor in the game, even though it’s a very serious theme and a serious rescue mission. These sisters are weird, but they’re also badasses. But they’re also kind of out of control, and they take a lot of risk.

The game will ship this year on a variety of platforms. It will be on display at Bethesda at the Electronic Entertainment Expo (E3) this week in Los Angeles. 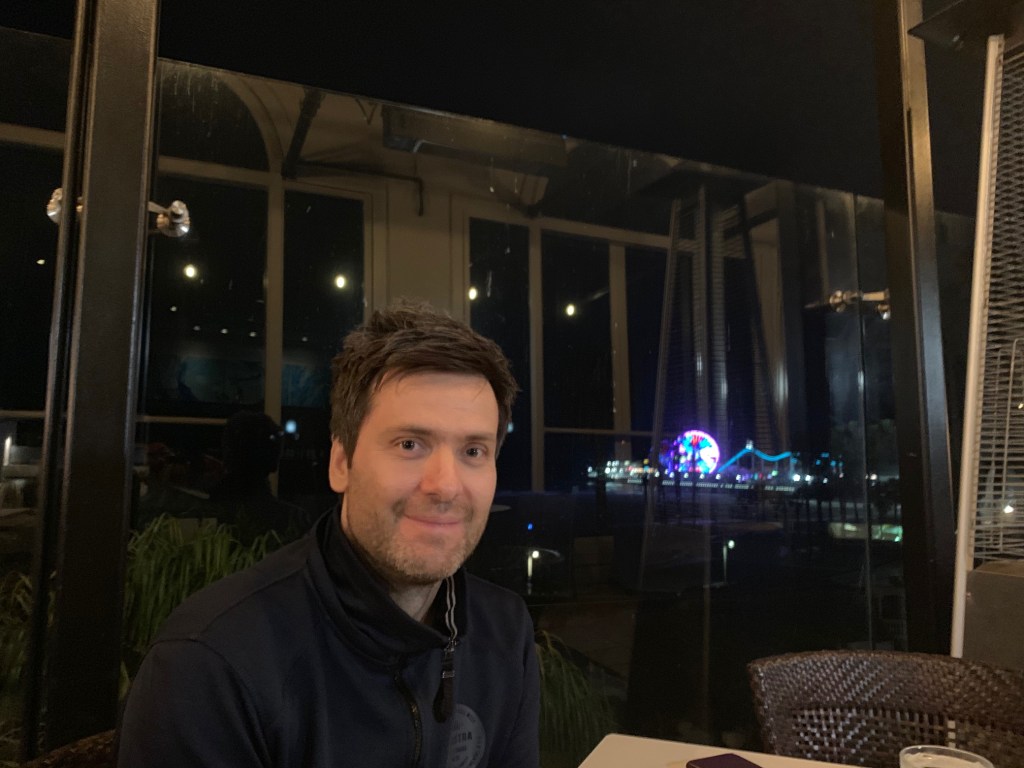 GamesBeat: The combat is very interesting. It made a lot of sense to me. The cinematics are long, too, quite lengthy.

Jerk Gustafsson: There’s a reason for that. If you look at the game as a whole, the storytelling and the cutscenes altogether, it’s actually a bit shorter than previously. It’s a bit lighter in both tone and content. But of course we have a lot of exposition that we want to communicate to the player in the beginning of the game, so it’s a bit on the long side in the beginning.

GamesBeat: Is that what we saw, the very beginning?

Gustafsson: Yeah, yeah. But as you get into the game — as we mentioned, we have a more open-ended structure now. It’s more non-linear. You can do things in whatever order you want to. We’ve focused a lot on the story beats at the beginning of the game, and also closer to the end of the game.

GamesBeat: Maybe it was because I didn’t get to the commandants fast enough, but they kept on bringing reinforcements. It looks like it’s a good idea to go right after them.

Gustafsson: It’s a bit different in this game. If you do go after the commandant and kill them, you don’t entirely stop the spawning from happening. What you do in this game, and what we’ve changed, is you’re reducing the amount of high-level enemies that are coming. It will benefit you if you target the commandants early. 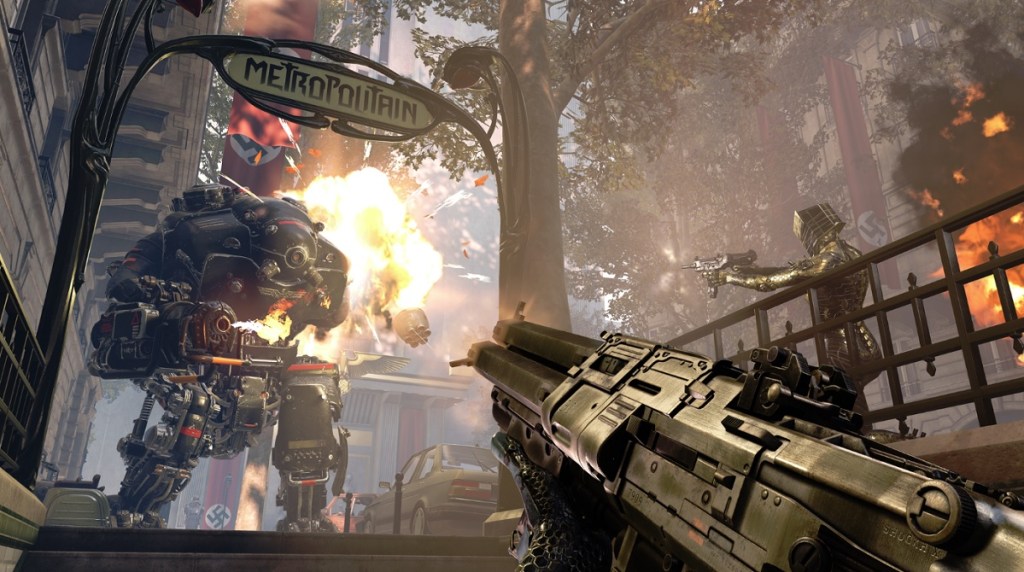 GamesBeat: Does stealth work very well against some of those high-level guys?

Gustafsson: It does. There are some more heavily-armed enemies, even bigger ones, that you can’t really do that to begin with, but all the human enemies, you can. If you’re efficient at stealth, you can take them out.

GamesBeat: With the general, could you use a stealth kill on him?

Gustafsson: No, because he has the power armor. That prevents you from doing that.

GamesBeat: But it’s useful to get behind him.

Gustafsson: It will be, yes. In general we’re trying to make sure that in all the scenarios in the game, you can sneak through them to some extent. But there are areas and bosses in the game that you have to face with no possibility of stealth. This is a good example of one of those.

GamesBeat: Where did the pep talk idea come from?

Gustafsson: What we started with, we added regular emotes, so you can do a thumbs-up animation, something more cosmetic. But then I thought, why not use it for gameplay? That’s where it comes from. The pep signal — the word “pep” felt to me like it worked well with the ‘80s theme, and for the sisters encourage each other.

GamesBeat: It’s almost encouraging communication between them. They like to banter.

Gustafsson: Yes, exactly. We have a lot of banter in the game.

GamesBeat: How did you settle on two players for co-op, as opposed to a bigger squad?

Gustafsson: There are several reasons for that. One is that this is a shorter project, so there were technical reasons. Considering the length of the project and the time we had, it made sense to do the two-player solution.

But also, when we started thinking about doing something cooperatively, we pretty quickly decided that we wanted to do something with the twins. We knew that Anya was pregnant with twins. It made sense to do something fresh and new in the ‘80s when the twins were older. We also wanted to do a story about growing up and the transition between adolescence and adulthood. Those were the main reasons for going with the two characters. There are also quite a few games out there that do two-player co-op. I think we can give something to players who enjoy that.

GamesBeat: What were the kinds of things you wanted to innovate on in that area?

Gustafsson: It’s hard to say where we’re innovating, but we do have — I feel you can see something in our games, even going back to the Riddick and Darkness games we did at Starbreeze, there’s something we do in our games that makes it feel like something our team is doing. We have that formula. Adding these elements to that, to some extent I think it will be unique in itself. There aren’t many other games like it. I don’t know how it will work — we have all these retro elements and this combat that’s different from previous games, and we’re trying to double it up with co-op — but we’ll see how it works. I’m quite happy that we’re doing it, because I feel it’s a lot of fun to play. 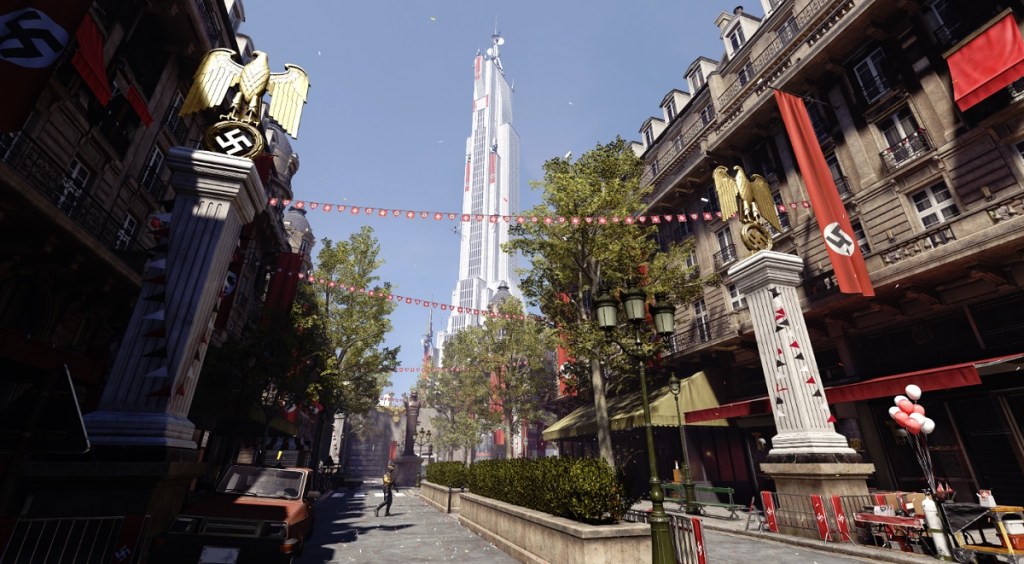 GamesBeat: It seems like it’s hard to do a shooter that’s also a comedy.

Gustafsson: Especially with these themes. We have to be a bit serious as well. We have to respect the darkness of the theme in general. You’re still fighting Nazis.

GamesBeat: They’re looking for their dad, too. That’s pretty serious.

Gustafsson: Right. But even in New Colossus, which was even darker than this story, we tried to integrate some sense of humor into it, even if it’s a dark humor. We’re trying to do that here as well. We can get into some trouble if there are too many shifts in tone, but I think we’re in a pretty good place. It’s different, but I’m quite happy with it.

GamesBeat: How long a game is this going to be?

Gustafsson: It’s a bit weird, because this is our biggest game yet, but it’s a pretty short production time. Like I said, the story is lighter in content as well as tone. But the level progression and the non-linear narrative gives us the ability to add a lot of activities and a lot of missions to do, so the total game time is actually longer than our previous titles. I think we’re looking at at least 25 to 30 hours if you play through everything. 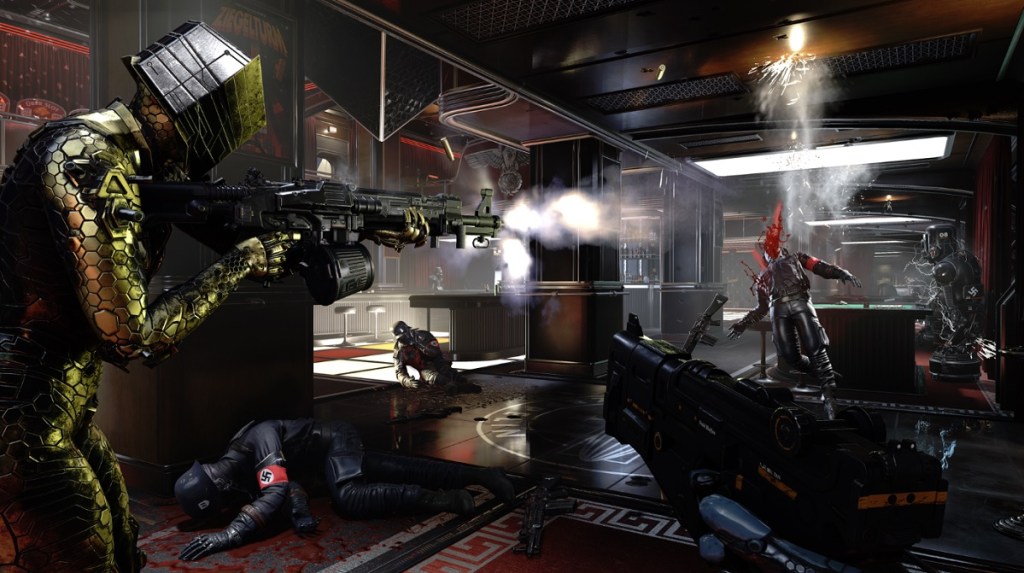 GamesBeat: It is unusual for you guys to have a boss with a name.

Gustafsson: That’s true. We have a few of those now. There’s always a challenge, because we haven’t done the co-op aspect before either, so we have to think about that as well.

GamesBeat: It looked like there’s a lot of effort to make both characters independent, but also push them to work together, lifting things and opening doors.

Gustafsson: That’s more for gating purposes, to make sure we can have the proper combat spawns and so on. But we tried to work with the sisters’ personalities as much as possible. This is co-op in the sense that our goal is to make sure you can have fun playing it together while you’re in combat. We haven’t put an effort into having too many different specialties for them. It’s a lot more like Halo co-op than Destiny co-op, if that makes sense, where you have the different character classes. We’re trying to focus on what’s fun to play together.