Wolfram Alpha gets the message: The quirky computational search engine dropped the price of its mobile web app to $1.99 from $49.99. They also launched a mobile web page and are promising a refund to buyers who came in at the app’s original unusually high price. Barak Berkowitz, the company’s newly-minted managing director who came from Six Apart, said the move was to “democratize” access to the app. 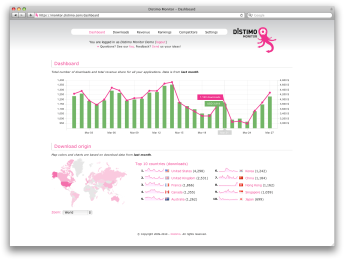 Distimo launches free analytics tool for comparing app performance across platforms: Where is your app selling best? Android? iPhone? Distimo launched a tool today that lets developers track their daily download and revenue figures across different app stores. You can compare how your app is doing against competitive ones. It monitors unlimited numbers of applications and handles foreign exchange conversions for major currencies.

Hulu is apparently profitable: Jason Kilar, the company’s chief executive, told The New York Times to video site has been profitable for two quarters while its public relations department made sure to trumpet its $100 million in revenues, I suppose this is a good thing. But then again, considering that it doesn’t factor in all the very expensive production costs for its premium content, maybe not. Plus, Hulu’s future is unclear given that Comcast is set to become a partial owner of the site through its NBC Universal purchase and has a competitive vision and offering through TV Everywhere.

Apple iPad reviews coming in: Walt Mossberg of the Wall Street Journal, David Pogue of the New York Times and Ed Baig of USA Today are all coming in with their reviews of the tablet computer debuting on April 3. The verdict? They all think it’s great. Mossberg says a lot of people might use the iPad more than their laptops, though they’ll still keep the laptops. Pogue says that technofiles will miss laptop-like features, but the broader public will likely love it. And Baig says this product will likely drum up mass market interest in tablet computers.

Real Networks cuts 60 jobs: The company is cutting back to get ready for the spin-off of its Rhapsody music business and to adapt to business conditions.