Glam Media, the controversial and fast-growing advertising and content site for women, will announce tomorrow (Monday) that it has raised $84.6 million in financing, at a whopping post valuation of half a billion dollars.

Separately, another ad network, Adconion, based in Germany (our previous coverage of the company), has raised $80 million from Wellington Partners and Index Ventures.

Silicon Valley-based Glam has created bewilderment in the advertising industry, because it has been racking up publishers as customers of its ad network at fast clip (it now counts 450 separate sites in its network). It welcomes publishers into its fold, and then places advertising on their pages – promising it can offer the publisher higher ad rates – and thus revenues — than other advertising networks can. Also tomorrow, it will announce it is now the largest woman’s network globally, surpassing iVillage last month, with 44.9 million uniques, citing Comscore numbers.

Critics, mainly Glam’s competitors, have seethed largely from the sidelines, saying Glam’s claim to be the largest woman’s network is a sham because Glam doesn’t really own the properties it places advertisements with, and because those advertisers can walk away at any time. 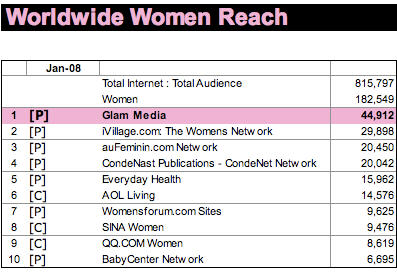 Glam, which has offices in Brisbane, Calif. and New York, raised the money at a pre-money value of $425 million. Of the total raised, $20 million was in debt. Once convertibles are factored in, the post-money valuation of the company is a robust $500 million. Just 17 months ago, the company was valued at a mere $150 million. We’re told that Glam still plans to raise up to a total of up to $200 million, with much of that being debt, over the next year.

So who was the suitor brave enough to lead an investment in Glam at such a high value, just as the U.S. economy is expected to tank and many expect advertisers to curtail spending?

Well, lead investor is Hubert Burda Media, the Munich-based media conglomerate and publisher of more than 260 magazines titles, many of them with an emphasis on lifestyle and fashion. It’s also a prolific investor in internet properties. Burda joined other investors GLG Partners and Duff Ackerman & Goodrich Ventures (DAG), along with existing investors Accel, DFJ, Walden VC and Information Capital. Hercules provided the debt.

VentureBeat learned of the deal shortly before announcement. I reached Marcel Reichart, a marketing executive at Burda, and he told me the investment was driven by Burda’s interest expanding into the U.S. online market. Reichart said Glam’s advertising model and technology were also draws.

Accel’s Theresia Gouw Ranzetta, who sits on the board, said Glam pockets about 40 t0 50 percent of the revenues it gets from advertising on its partner sites, giving the rest back to the publishing partner. What is remarkable is that Glam pays nothing to produce the content on those publisher sites, meaning it is milking those sites for a full 40 to 50 percent of their worth — merely for providing them with advertising technology. A publisher like Cnet, which might keep all the advertising revenue from its directly owned sites, will pay the equivalent of half its revenues to produce the content. In other words, Glam “cost of sales” is 40 to 50 percent, the same as Cnet, and yet Glam isn’t having to produce any content. That will make other networks green with envy, but it might make publishers ask whether Glam’s take is too high.

Separately today, Glam announced it is rolling out operations in the U.K, where Glam says it has now surpassed iVillage and CondeNast in online reach. It plans to open offices in Germany and other countries soon.

Glam’s value-add is its approach to display advertising on Web sites. It has developed a software that lets large brands target users more closely, letting them avoid advertising next to, say, a competitor’s product, or allowing them to target a certain age group of women or other demographic. Glam’s technology sits on top of conventional advertiser server technology, such as Doubleclick’s. Glam says this superior advertising offering lets advertising rates remain high, which means Glam’s publishers will stay content. Second, Glam says its own high-quality core content properties, which command high advertising rates, have had a lifting effect for ad rates across its partner sites.

Banc of America Securities and the ubiquitous Allen & Co. (see our coverage of the secretive bank), served as the lead placement agents for the financing.

Glam has made several high-profile sales and ad technology hires recently (see coverage), including Kiumarse Zamanian, who ran the SmartAds display ad platform for Yahoo. He has the mandate to build the “AdSense” display for Glam, which the company is calling Glam Evolution Ad Platform (a mouthful). See screenshot below.

But more significantly, in terms of addressing its critics, it has brought on higher end publishers, including style and entertainment properties CBS Entertainment and Lifetime, and it has minimized its reliance on properties considered lower brow, such as MyYearBook (see our coverage last year, when MyYearBook made up a major part of Glam’s traffic).

Glam says it is now the 16th largest media property, again citing Comscore (see below), and 28th among all web properties. 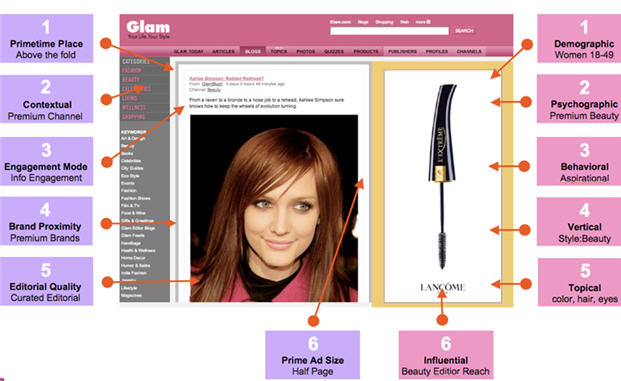 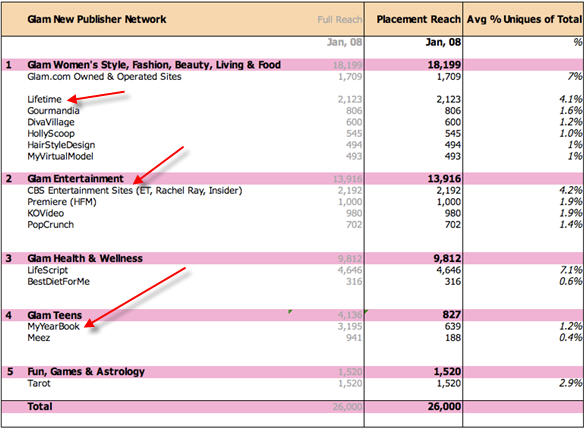 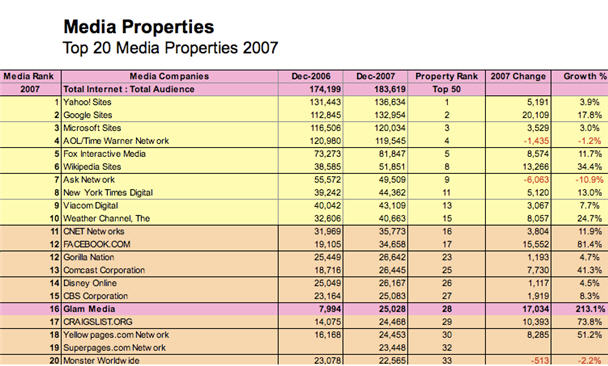