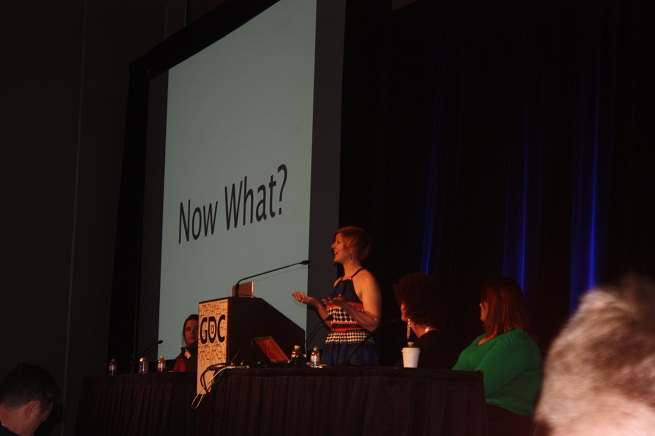 Female game developers have had a roller-coaster year, with issues of sexism, diversity, and media bias coming into focus in a sharper way than ever before. On Wednesday, those veteran women developers let a lot of emotion loose in a session entitled 1ReasonToBe at the Game Developers Conference (GDC) in San Francisco. The response wasn’t outrage. It was a standing ovation. 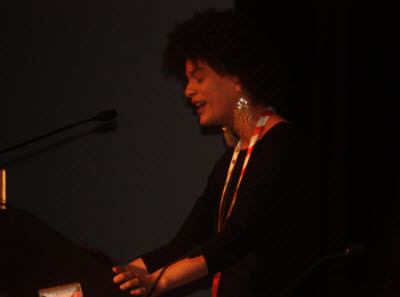 The session included pioneering developers as well as newcomers: Brenda Romero (also previously Brenda Brathwaite, best known for Wizardry 8), Robin Hunicke (the executive producer of game-of-the-year-winner Journey and co-founder of game startup Funomena), Leigh Alexander (a game journalist for Gamasutra), Kim McAuliffe (game designer at Microsoft Game Studios), Elizabeth Sampat (a game designer at Storm8), and Mattie Brice (a game critic and consultant, pictured right). The panel was part of an advocacy track focusing on issues about working in the business. In past years, it might have been poorly attended.

But with the Internet magnifying debates on sexism in games, the issue has become more heated and passionate, and it is on everyone’s radar this year (see this related story on gender issues), said Kate Edwards, the executive director of the International Game Developers Association, in an interview.

“My feeling with that is that the issue’s time has come,” Edwards said. “It’s something that needs to be discussed rather than just dismissed. I’m glad, also, that we’re seeing a diversity of opinion, especially among women.”

The panel wasn’t just about griping. Each woman cracked some jokes and tried to inspire others to take up game development as a career.

Each of the women on the panel told personal stories about getting started in the male-dominated video game business. They were all very different people, and they didn’t line up with exactly the same kind of feminist viewpoints. In that way, they encouraged a diversity of views on the subject of how women can best succeed.

Hunicke said her path into games started early, when as a student she was identified as gifted. She did well in a variety of subjects in math, science, and arts. She found it hard to decide what to focus on for a career and began to embrace computers because it could combine her interests in all subjects. After a stint in artificial intelligence, she gravitated to game design and started attending GDC in 1999. She joined EA in 2005 and went to work on The Sims 2. She became a lead designer on MySims and helped create Boom Blox on the Wii. Then she joined Thatgamecompany and became executive producer on Journey. She left recently to co-found her own game studio.

Hunicke didn’t relate a horror story. But she did say how small things annoyed her. A cab driver discovered she was a game designer and then said, “You’re a nerd? Well, then you’re the hottest damn nerd I’ve ever seen.”

It’s a sore point because Hunicke was recently “recognized” as one of the 40 hottest women in technology. She would rather be known for her accomplishments, not her looks.

“I am sick of people choosing for me before we even have a conversation,” she said. “It’s insulting because I am a curious person, but I don’t want to be a curiosity.”

That’s why she participated in the #1ReasonToBe women in gaming movement that began on Twitter. She wants women to help each other and everyone to make the games industry achieve better diversity.

“I don’t want to sound harsh, but this is a Yoda thing. You are working actively to broaden participation in our industry, or you are in the way,” Hunicke said.

Exactly how to battle sexism is up for discussion. Hunicke said people should organize, evangelize, and catalyze. The latter means starting your own company when corporate barriers arise. With the indie revival, it’s getting easier to do that in games, but women chief executive officers are still rare. At the other end of the spectrum, Hunicke said she wanted the kids of today to become the game developers of tomorrow.

“Thank you for speaking for me and others like me,” said one woman in the audience. 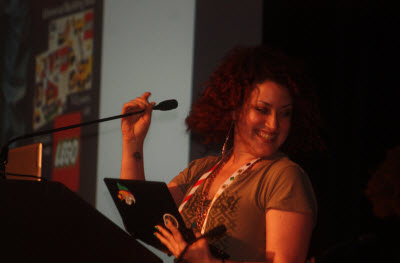 Alexander at Gamasutra said that she pays attention to the issue of sexism in games because “any problems in the game development ecosystem comes through to the product.” The result can be bad games, sexist characters, and sexist game marketing. Those problems hurt the industry’s overall sales and limit its ability to appeal to more people. She noted that the debate about feminism has created a big conflict point on the Internet, with outbursts of outrage and backlash against the outrage. Internet culture hasn’t been encouraging empathy.

Alexander said she would use her “megaphone” to make a positive contribution. She said that she doesn’t see overt sexism in the form of guys who are jerks that often, but she notes that the jerk thrives in an environment where sexism is more subtle. She knows there are “booth babes at [the Electronic Entertainment Expo],” the scantily clad women who are used to market games to gamer dudes. But the subtle issues bug her, too. 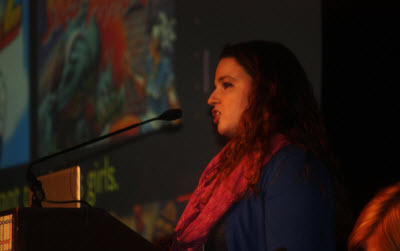 Kim McAuliffe (pictured left), a game designer at Microsoft, said she didn’t have horror stories to tell. She grew up in the 1980s playing games such as Street Fighter. She became a programmer and an artist and eventually joined a game company in 2005.

As for horror stories, she said, “Not everybody has gone through that.” But what has bothered her throughout her career is the “assumption that the player is always male.” Too often, she has heard things like “girls aren’t our target audience.” She hasn’t always wanted to work on games where you “shot other humans,” but she hasn’t always had the choice.

“Minecraft came along and showed us the gaming audience is way more diverse,” she said. “It is no longer the small subset of hardcore players.”

At Microsoft, she worked on a National Geographic motion-sensing Kinect game for the Xbox 360. She felt good that it was a game where everyone, including girls, are empowered to play.

“Let’s make girls expected as players,” she said. “They will naturally grow up to be part of the industry.”

Elizabeth Sampat, a game designer at Storm8, asked the audience for permission to curse. She got it. And she dropped a lot of F-bombs. She got into the industry designing tabletop role-playing games in her spare time “while raising two kids on food stamps.” She brought up a lot of the “advice” she and others have received over the years about how to fit into the workplace as a woman.

“Don’t be a slob, but don’t dress too sloppy or you will be branded as a fake geek girl,” she said, satirizing the “sound advice” she got.

Mattie Brice, a game critic and game designer, said she started blogging 18 months ago about women and minorities in games. She found that in order to find games with characters that looked like her, she had to start creating games herself. She said she has gotten rape threats, death threats, and had her blog hacked with pornographic images. 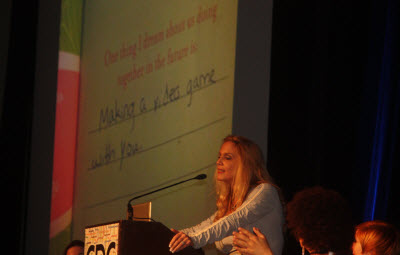 At some point, Alexander said she would love her work as a journalist to be judged in a gender-neutral way, but inevitably arguments about what she writes spill into the gender domain. Eventually, she said, “I want to be less of a pundit, more of a good listener.” But as for the “nerd bros” who view the games business as their own domain, she said, “This is everyone’s games industry now, and so they better get used to it.”

Brenda Romero (pictured right) married the equally famous Doom co-creator John Romero. Under the name Brenda Brathwaite, she has been making role-playing game for decades, but she is sometimes introduced as the “wife of John Romero.” She said the E3 booth babes still bug her, and she has been trying for years to get the Entertainment Software Association to get rid of them. In 2006, E3 show management issued a policy to limit booth babes, but it hasn’t enforced that policy, and the booth babes have come back.

At E3, she said, the booth babes are so ubiquitous that it creates a “sexually charged atmosphere.” She said, “It felt like walking through a construction site. Why do I feel this way? I founded this fucking industry, you motherfuckers. I felt like I was receiving a lot of gazes I didn’t want to receive.”

Romero said that she was touched recently when her daughter gave her a card that said one of the best things she could hope for was to make a video game with her mother. Her daughter is the highest level (85) in World of Warcraft, and she is on her school’s honor roll. That card gave Romero a lot of joy. But as long as the booth babes at E3 make all women feel “gazed upon,” Romero said she can’t take her own daughter to visit the show. After she finished her comments, the crowd gave a standing ovation.

“I want her to feel safe there and not gazed upon,” she said. “That is all I am asking.”

[Update: Romero tweeted this morning: I resign as co-chair of the IGDA Women in Games SIG effective immediately. #1ReasonWhy. It is evidently related to the IGDA’s sponsorship of a party where scantily clad women appeared.]