updated, to include response from Chao

Stephen Chao, the former president of Fox TV and USA Networks, has launched Wonderhowto.com, yet another “how-to” video site, claiming to have an edge over its rivals — with 90,000 instructional videos.

The NYT was given the scoop on the story, and doesn’t make Chao look too good. It calls him one of America’s “most spectacular flame-outs,” mentioning how he was fired from News Corp. after hiring a male stripper to disrobe at a company meeting, and separately, nearly drowning Rupert Murdoch’s dog at a party.

Yet he has received financial backing for this from General Catalyst Partners and has signed up Scripps Networks to run ads for the site.

This despite the fact that it faces stiff competition, and there’s absolutely nothing new in his approach. YouTube probably has more than 90,000 instructional videos, but we haven’t counted. There are whole bunch of sites that are already focused on “how to” vidoes and doing it exceptionally well. There’s Instructables, 5Min, VideoJug, ExpertVillage and DIY Network (see some of our coverage here). Finally, there’s emerging efforts such as those by Martha Stewart Living.

(Image of Chao is a thumbnail from the NYT story.)

Update: We’ve since talked with Chao. He says WonderHowTo is different because it seeks to point to only the best how-to videos. It doesn’t host any videos itself, it merely points to the servers where other videos are hosted. It uses multiple human curators to mine through the videos around the Web to make sure WonderHowTo points only to relevant videos. Then, when people search for certain types of how-to videos on WonderHowTo, they get ranked results, and WonderHowTo, can run advertising beside those results. The other players, 5Min, ExpertVillage, etc., host videos on their own sites, he said, and don’t do this sort of aggregation. 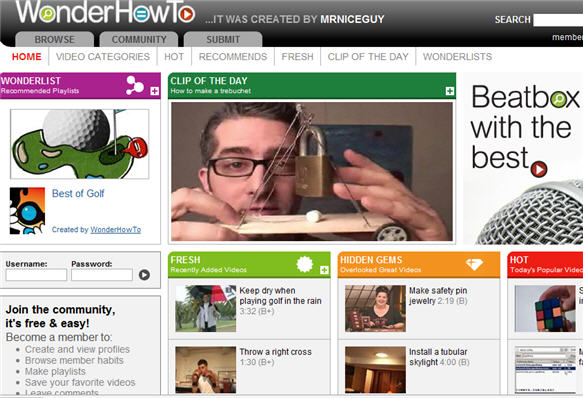