“There is a true crisis around ‘child care deserts’, where for every one slot at a child care center, there are three or more kids vying for the spot,” said Wonderschool’s head of early care and education, Mia Pritts, in a statement.

San Francisco-based Wonderschool assists educators and child care providers with licensing, program setup, marketing, and more — with the goal of helping working parents. Participating teachers can use the Wonderschool dashboard to manage their programs, track students and parents, and list their schedules. Wonderschool currently works with 54 educators and collects 10 percent of their monthly tuition fees. 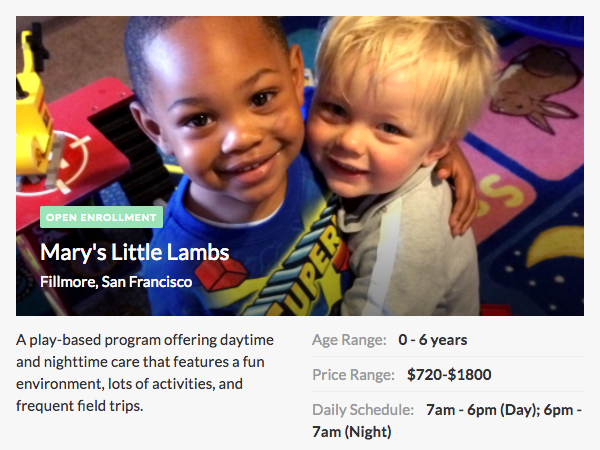 Above: Example of a listing on the Wonderschool website

Wonderschool founder and CEO Chris Bennett explains that although some big companies, like Google and Pixar, provide on-campus preschool systems, the number that do so is very low. “Only about seven percent of all companies offer early childhood programs,” he wrote in an email to VentureBeat. That figure isn’t necessarily shocking in light of the fact that tech giants like Apple and Facebook don’t provide child day care centers on their campuses — not even at Apple’s new $5 billion headquarters in Cupertino, California.

According to a recent Bloomberg news report, while some family-friendly benefits are on the rise, day care centers are on the road to extinction.

Bennett claims to have 150 parents enrolled in Wonderschool’s programs, which are located in San Francisco and Los Angeles. The startup will use the new money to expand to 15 new cities across the U.S. and to hire more people to grow its team. It is also in the process of acquiring one of its competitors, Daybear.