The much-anticipated dating and meeting site WooMe is launching to the public today, with some new features and plans. We first wrote about the company during its alpha launch, at the TechCrunch40 conference.

Dating is both one of the more challenging and more lucrative niches on the internet. From eHarmony to HotorNot, iminlikewithyou to Match.com, sites have struggled to overcome the social stigma of internet dating and the difficulty of getting people to show off their personalities online — without making them work too much at it.

WooMe’s angle is speed dating. Its real-time, minute-long video meetings let users see and talk to each other immediately, allowing the site to get away with only asking for skeletal user profiles and avoid the time-consuming profile-building of other sites.

However, WooMe would prefer to slip around the stigma of the “dating” label entirely by encouraging non-dating uses. CEO Stephen Sokols told us that initial users have been using the platform to meet potential traveling or carpooling companions. 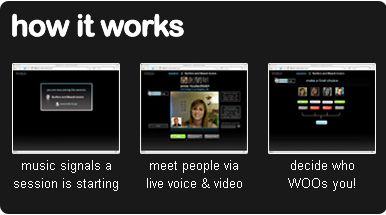 The site will also allow “Any to Any” meeting sessions, in which there are no restrictions on the sexes of the participants; even before the feature was in, we spotted a few business networking sessions taking place on the alpha version of the site. For those who are actually interested in dating, the sessions are quick and easy, and end with a simple yes or no choice of whether they’re interested in a particular person.

Also recently added are a “Flake-o-meter” to point out users who tend to sign up but not show for sessions, a voice-only option, and the ability to invite others to sessions through Facebook. But the really neat new feature of WooMe centers around its plan for ads.

When we first talked to the founders of WooMe, they were still deciding how to handle monetizing the site, aside from a $1 charge required for users interested in each other to gain the ability to contact each other directly (something users will be able to get around easily enough, by simply opening a new session and telling each other their email addresses).

They’ve decided to keep the site clean, not placing any display ads. However, WooMe will selectively slip video advertisements into sessions that have extra room. For example, if a session is set up for five men and five women, and only four women sign up, the extra minute-long slot will be filled by a video ad. (If less than three women sign on, the session will be canceled.)

However, if you decide that the ad is annoying, you can reject it — just like any of the other participants in the session. Alternatively, if it was a good ad, you can Woo it and see similar ones next time there’s an open slot.

That will provide some built-in targeting, and also give advertisers some valuable feedback on whether their ads are making an impression, or simply irritating people.

Sokols says that WooMe is already in discussions with one of the top three dating sites in the US to offer its video sessions as an add-on; later, it may offer a white-label version to other companies that have a use for it (for example, a recruiting firm that wants to interview batches of candidates).

Overall, WooMe has a better design and more innovative features than its only competitor, SpeedDate.com, which has the sickly-sweet look of an 80’s video dating service. We think it’s likely to succeed — how about you? The site is open to all registrations today. 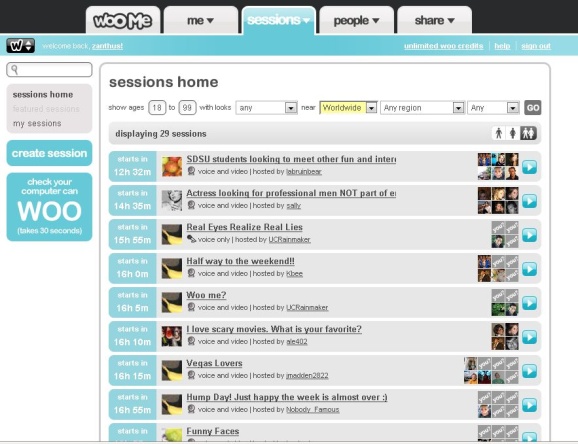