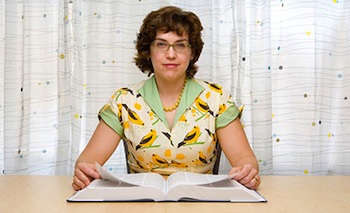 Wordnik, the startup that has supposedly built “the most comprehensive dictionary in the known universe,” announced an initiative in February to make the text in e-book readers more information-rich. Tomorrow morning, cofounder and chief executive Erin McKean (pictured) will demonstrate the progress of the Smartwords project on-stage at the D8 conference in Rancho Palos Verdes, Calif.

With Smartwords, users should be able to get better definitions and examples of words than they would find in the dictionary — definitions that are sensitive to context and enable further interaction. For example, one of McKean’s demonstrations will involve reading the young adult bestseller Twilight. Using Smartwords, publishers could create an e-book where before turning each page, the reader has to answer an SAT-style question about one of the words on the page.

As another example, McKean said that if readers encounter a technical word, they aren’t stuck with a hard-to-follow dictionary definition, but could instead read a concise explanation from Scientific American. And there are opportunities for making money, too — for example, if you’re reading a novel like High Fidelity, which drops the name of pop songs on every page, Smartwords would know that you’re looking up a song title and could help you buy the song or a related mix of songs.

“When readers look something up in a dictionary, they want to open a window, and what [dictionaries] give them is a window that looks out onto a brick airshaft,” she said. With Smartwords, readers will get a “sprawling vista of all the places you want to go.”

McKean said she will demonstrate these features on an iPad, the device getting the most interest from publishers and developers, but Smartwords won’t be restricted to a specific device. Wordnik plans to release the first version of the Smartwords “open standard” at the end of June, and hopes to see the release of the first Smartwords apps this fall.

I’ll embed the video of McKean’s demonstration below when it becomes available.