Automattic, the parent company of blogging platform WordPress, has just introduced what at first glance is a messaging system like Twitter, but for groups.

Instead of individuals twittering away on universal platform, this one lets the multiple users of a single blog post status messages — about the project they’re working on, for example. It lets people tag their message, for example according to project, and subscribe to the RSS feed of any tag or person. This lets large teams coordinate better, and indeed, the WordPress developer team has used it internally to track their own ever expanding workforce, chief executive Toni Schneider told us last night (he’s pictured above, in the Prologue message).

WordPress founder Matt Mullenweg refers to ‘Twitter’ in the fourth word of his opening paragraph of his introductory post about the new product.

In actuality, though, Prologue is different from Twitter in both its purpose and its execution. It’s more akin to 37 Signal’s collaborative tool Basecamp (as Mullenweg also mentions further down in his post).

While Twitter still offers the ‘What are you doing?’ hook at the top of the page, using Twitter to describe only what you are doing is becoming less the norm. Instead, people use their 140 characters to describe a feeling, share a link, or simply respond to what another user has tweeted, among other things. It’s gotten noisy, which is fine in some regards, but hardly conducive to getting work done. Prologue, at least in its genesis looks to hearken back to the simple status update days. You’ll remember that Facebook also started pushing for the same simple status update emphasis in 2007 (no doubt thanks to Twitter’s rapid rise). 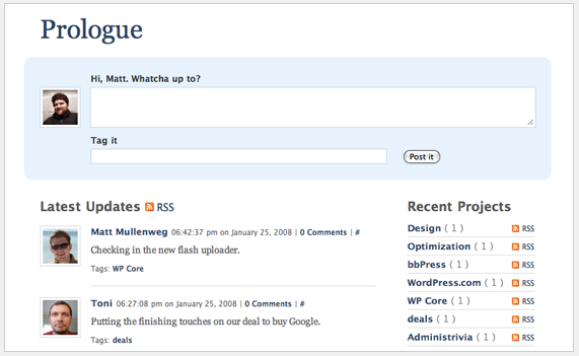 You might be wondering, as Mark Hopkins at Mashable does, if you’re going to create a group Twitter, why not just pipe in individual users’ Twitter feeds that they are already updating?

Well, as Mullenweg explains, Prologue allows for a controlled environment where potentially sensitive material can be discussed behind password protection. It could be possibly to build a private Twitter pipeline, but why go to all that trouble when you simply want to have a quaint ongoing conversation between colleagues?

This is where the parallels with Basecamp come into play. However, Basecamp relies on a more complex system of creating tasks, larger projects and other features more typically seen in software designed for organizations. It also as a separate site that participating parties would have to load whereas Prologue exists right within WordPress which you likely have open to write in already.

“When you’re thinking of a project, and wondering about its status, you don’t want to jump on IRC and ask…but this way, you can track things with tags, not just what individual are working on, but projects actively developed right now, ” Schneider explained to us.

Prologue also offers another advantage over Twitter in that you can use tags to separate out different discussions Schneider says. It also allows for more direct responses to statements via comments – something that can often be very easy to miss on Twitter as they rely solely on the @username call – which can quite often be mistyped a number of different ways.

Near the end of Mullenweg’s post, he indicates he’s open to people using Prologue as a basis to create what they will with it, making Allen Stern of CenterNetworks think Prologue could be “game-changing.”

While it’s pretty clear that the WordPress team isn’t going to take the lead in driving towards this direction – as Toni tells us “we really like Twitter. We’re not trying to compete with those guys” – it is certainly possible that Prologue or micro status updates in general could become a central part of blogging and other collaborative writing tools. If people are already using and familiar with a certain platform on a large scale (like say, WordPress), who’s to say it can’t be very successful if someone builds an outward facing usage of it?

Twitter has an API so developers could build a group Twitter with the various features Prologue offers. However, it would be difficult for any application to match the features that WordPress offers so conveniently because of the seemless tie with WordPress blog software.

Could WordPress be used as an open platform, like Twitter? Schneider says theoretically, yes. All you do is is create a registration page, and you can let outsiders sign up on your blog, and it could become a universal Twitter-like service. However, it will most likely be used in two other ways, he said. First, groups will create private chats, and won’t open up. Or second, the group will let anyone read the messages, but only let the group members post to the Prologue.

While Twitter has so far easily fended off competitors such as the much more feature-rich Pownce, competition will continue to come with new features and eventually one of these will overtake Twitter if they don’t adapt. For now though, Prologue is simply a nice tool that will make collaborative writing a lot easier.

Also, Automattic is fresh from a $29.5 million funding round (our coverage) and a couple Crunchies trophies. It is a company to watch this coming year.

MG Siegler blogs on technology and new media at ParisLemon.com.