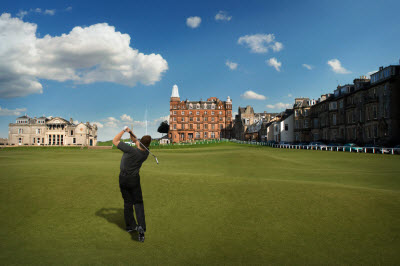 Three years ago, YuChiang Cheng and Chad Nelson launched a company to create an online version of golf. If you can’t get to the real courses, the next best thing would be virtual golf links, they figured. Now, World Golf Tour has the makings of a real business.

Its success doesn’t depend on beating out a million other game sites, but rather convincing golfers to pick up an online video game in the first place.

The company launched a beta version of its online golf game 18 months ago and it now has 400,000 unique monthly users. Altogether, more than 1 million players from 180 countries have registered to play. Those fans have played more than 19 million rounds of golf.

That’s pretty respectable, but not enough to build a profitable company yet. There are still challenges ahead as the site tries to gather momentum. The company has to face Electronic Arts as it enters the online golf market with its Tiger Woods brand, and it also has to deal with users shifting from visiting web sites to playing games on Facebook. 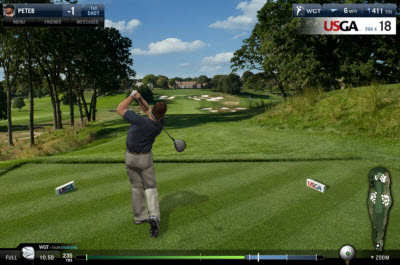 Cheng said in an interview that the company is working on a Facebook version of its game. Also, EA’s Tiger Woods game will be animated, while World Golf Tour’s games are done with a realistic style that makes you feel like you’re at famous courses such as St. Andrews. (And, of course, the Tiger Woods billion-dollar brand name has been described as the most-embattled brand thanks to the recent crash/affairs controversy).

World Golf Tour’s game is more like a simulation, allowing you to take an infinite number of practice shots on courses where you would otherwise have no opportunity to do so. The developers build the courses by taking thousands of photos from almost every point of view on the real courses. Then they stitch it together using World Golf Tour’s 3-D technology. The idea is to make it so real it can help golfers with their real-world skills. 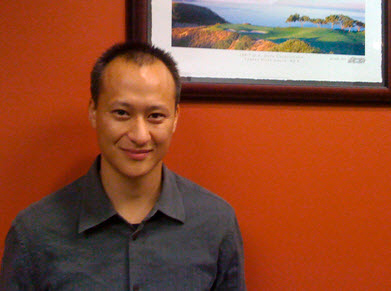 “Our conclusion so far is that everyone can be a gamer if you make it simple enough,” Cheng (right) said. “Our technology lends itself to an adult experience.”

Players can play in parties of four, text chatting while they play the game. That makes the game more social, much like golf in the real world. The company makes money through banner ads, in-game ads, and micro-transactions. For instance, you have to buy golf balls to play, and if you lose them in the water, you have to replace them. It held a virtual U.S. Open in which 200,000 players participated.

World Golf Tour has raised two rounds of funding to date of some $1 to $5 million. It has 40 employees and it has 12 courses available now, including St. Andrews, Kiawah Island, and Pinehurst. In 2010, the company plans to add four or five more courses. Cheng said the company is not yet profitable.

Cheng believes virtual sports will eventually become a huge market, like fantasy sports. QuickHit is creating online football game, while Challenge Sports has created a soccer game. But there isn’t a real competitor in the realistic golf simulation category yet.