Hitbox, a European startup that can stream gameplay at 4K resolution, has raised $4 million from World of Tanks developer Wargaming and others to further develop livestreaming service in competition with Amazon’s Twitch division.

The deal shows that Vienna, Austria-based Hitbox is making progress in its effort to provide competition to Twitch, which has become a broadcasting and esports juggernaut with more than 100 million monthly active users. Like Twitch, Hitbox hopes to hitch its fortunes to esports, the pro gaming phenomenon which is expected to grow to $1.8 billion by 2018, according to market researcher SuperData Research. 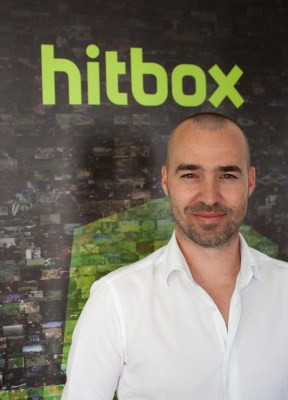 Above: Martin Klimscha, CEO of Hitbox.

European venture capital firm Speedinvest led the round, with additional investment from Wargaming, North Base Media, and other angel investors. In less than two years, Hitbox has grown to 6 million users. Hitbox will use the money to expand its presence in the U.S. market and other key places around the globe.

“We want to take livestreaming to the next level,” said Martin Klimscha, CEO and cofounder of Hitbox, in an interview with GamesBeat. ” We’re at this intersection of digital, social and technology, which is critical to reach millennials and younger. Twitch and Google are doing that, but there are very few others who understand this and have the technology to do it.”

Klimscha said that Hitbox will likely do a close integration of its service with Wargaming’s titles, which include World of Tanks, World of Warpalanes, and World of Warships.

Sean Lee, chief strategy officer at Wargaming, will join Hitbox’s board of directors. This investment follows a seed round of $1 million from angel investors, which closed in 2014. In some ways, it’s a surprise to see a publisher like Wargaming invest in a new gameplay livestreaming platform. On the other hand, it makes sense for Twitch, which has 100 million monthly active users, to have some competition.

“Supporting live streaming for our games and fans has always been a key pillar in our strategy for growing our online presence,” said Lee, in a statement. “Hitbox allows us to truly make live streaming an extension of Wargaming and our titles through the ability to integrate game data into the broadcast. Gamers will be able to share their experiences easier than ever before, and our channels will have the robust infrastructure AAA gaming demands.”

“We have created a new bar in the market that didn’t exist before by creating the technology” for livestreaming in 4K at 60 frames per second,” Klimscha said.

This fall, Hitbox says it will broadcast esports events in 4K resolution at 60 frames per second.

Hitbox is seeking a variety of partners to help grow its audience. The company has 31 employees and it will add more this year, Klimscha said.

Klimscha said, “A lot of companies are seeking to be our partners. We’re making key hires and building up a U.S. office.”

On the community front, Hitbox recently announced a new revenue-for-all model, which is driving broadcaster growth across all games and genres. Now all Hitbox broadcasters, no matter the size of their viewing audience, can participate in revenue sharing through video advertisements and viewer subscriptions.

Speedinvest is an Austrian venture capital fund founded in 2011 with $75 million under management. Hitbox said separately that it will be the main sponsor of a new esports team, dubbed OG. The line-up for OG, which was previously known as Monkey Business, plays Dota 2, and it has qualified for the ESL One Frankfurt tournament next month.

The funding shows that investments in game startups haven’t completely dried up, despite a big drop in average game investments compared to a year ago.

“While the appetite for investment has softened for traditional game companies, we see a different story,” Klimscha said. “And, look at the huge growth and interest in esports. There are many companies trying to figure out how to capitalize on that and we have that experience: a digital presence, social community and the technology to drive it.”