What if you crowdsourced your logo design and everyone came?

That’s almost what happened to TimesSquare.com, a New York publication that opened a logo contest on DesignCrowd, an online marketplace for design jobs. The company offered a $10,000 prize for the winner, and as of this morning, DesignCrowd’s 83,000 designers have submitted 5717 entries.

Lynch believes that both the prize and the number of submissions are the largest ever for an online logo contest.

[Update] I just received an email from a PR rep for 99designs, which received 7,972 entries for an Occupy.com logo contest earlier this year. So: no world record … and the gold goes to 99designs.

DesignCrowd is a online marketplace for freelancers, similar to an eLance, oDesk, or Guru.com, but it only focuses on design. The site also offers community contests, crowdsourcing challenges that open up gigs to all designers on the site. For $30, you can post a design challenge to which anyone on the site can respond. Of course, the bigger a reward you promise for the winner, the more interest you’ll likely receive.

The entries are not all from individual designers — in fact, the 5,717 entries were created by just 1,300 designers. Art Tank — the #11-ranked designer or design team, with over $25,000 in billings so far — has submitted at least five designs. 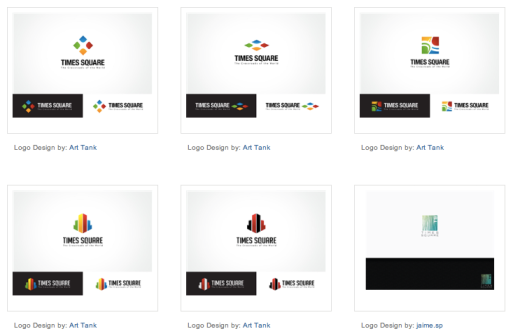 Above: Submissions for the TimesSquare.com logo

In what seems to be an oversight, no online voting exists to determine the winner or at least highlight top options — clients decide which logos they like. With so many submissions, that will be a formidable task for TimesSquare.com.

In any case the founder of TimesSquare.com, Lorenzo Tartamella, seems happy enough, saying that “the process has exceeded our expectations and the world record is icing on the cake.”

But designers will have to exercise considerable patience.