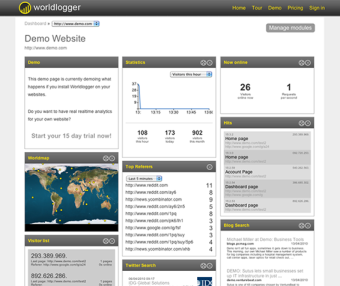 There are plenty of website analytics tools that monitor social network traffic. Chartbeat is probably the best known. But a two-man team in Amsterdam that calls itself Ape55 believes it has an attractive alternative in new tool called Worldlogger.

“Chartbeat didn’t provide all the information we wanted to see,” co-founder Jaap van der Meer emailed us, “and also presents a lot of information at once, which makes finding the information we needed not very clear. Blog search is not one of their features. And also if you own multiple websites, you have to open multiple screens.”

Beyond that, Worldlogger’s multi-site capability makes it possible to view several sites at once without flipping through tabs. You can resize or remove the individual modules on the page. It’s also easy to chart goals, such as plotting visitor counts versus signups, in a dashboard that includes all of the most important metrics and none of the ones you don’t care about.

Dutch site Floorplanner is using Worldlogger, as is a large European blog that asked not to be named for privacy reasons. Ape55 hasn’t announced pricing yet, but van der Meer says it will start at around $5 per month. That’s half Chartbeat’s entry-level rate, but Chartbeat has a proven track record and an impressive set of clients that includes both The New York Times and Gawker Media. Ape55 has some good ideas but needs to spend some time building a reputation for itself.