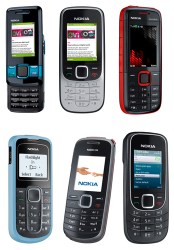 Low-cost Nokias will probably ensure Nokia’s dominance of the non-smartphone market for another year. But the low end is no longer the place to be. A new report from Gartner says worldwide sales in the second quarter of 2009 dropped six percent from Q2 2008. But phones classified by Gartner as smartphones shot up 27 percent.

Many people buying new phones, says the report, want either a QWERTY keyboard or a touchscreen. Still more, though, are buying on price.

“The recession continued to suppress replacement sales in both mature and emerging markets. The distribution channel has dealt with lower demand and financial pressure by using up 13.9 million units of existing stock before ordering more. Gartner expects the gap between sell-in to the channel and sell-through to customers will reduce in the second half of 2009 as the channel starts to restock.”

Nokia is still the undisputed market leader. It sells nearly as many phones as its next four competitors combined. In the US, though, Nokia hasn’t been able to pull wealthier, more status-conscious Americans away from their iPhones, BlackBerrys, G1s and Pres. That seems to be Nokia exec Tero Ojanperä’s job, which he plans to execute by turning Nokia into “the world’s biggest entertainment media network.”

The report has other data points worth cut-and-pasting here:

– Palm Pre: “This device attracted a lot of media attention but showed mixed results at the cash register as sales only reached 205,000 units. Palm currently ranks tenth in the smartphone market and Gartner remains concerned about its ability to gain traction outside the US market, where its brand is less strong.”

– Netbooks: “Operators are also starting to subsidise e-book readers and mini notebooks on contract and this means that there will be less subsidy available to drive sales of mobile phones and smartphones. In turn, operators will demand lower prices from phone manufacturers, which will be under even more pressure to deliver strong feature sets at the lowest possible price.”