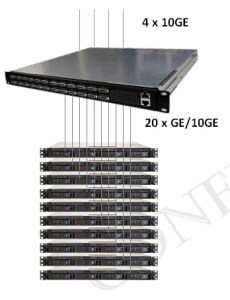 Woven Systems is launching its second generation of networking products that serve as the energy-efficient communications glue for corporate data centers.

The Santa Clara, Calif.-based company makes 10-gigabit Ethernet switches that compete with the likes of Cisco, Foundry Networks and Force10 Networks. These products solve a fundamental problem: as the number of servers in a data center skyrockets, so do the bandwidth needs. Today’s servers are also more dense: they can fit multiple quad-core processors in a single machine. And each one of those processors needs bandwidth. These trends are changing the networking infrastucture that is needed inside the data center.

The company is interesting because you don’t expect to see someone take on these big companies inside the core of the data center, which should be the domain of billion-dollar companies, not start-ups. It’s been a long time since anyone had a chance to challenge Cisco in this space. But Woven’s first round of products got traction and this one should be interesting to watch.

Woven is addressing the problem with the new TRX 200 family of 10-gigabit Ethernet switches with 24 ports. It fits in the same networking infrsatructure as Woven’s existing product, the EFX 1000. The company has been working on this new product line for some time since it had to design its own custom chips. 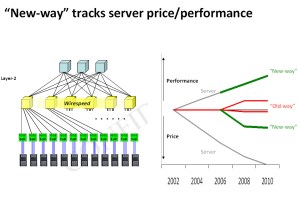 It’s boxes like these that speed up the links between racks of servers in data centers and makes them more energy efficient. Woven Systems is in an arms race with Cisco and others to constantly lower the costs of data center computing. The TRX 200 goes for $11,995 and is available now. The boxes have been designed so that they can provide much more bandwidth for a given set of servers than rival equipment.

Startups in this area aren’t all that plentiful. But this one is interesting because it’s headed by Jeff Thermond, who has had a Midas touch in the field of networking. He founded Epigram, a maker of phoneline networking chips for homes, and, during its pre-revenue stage, sold it for $316 million to Broadcom in 1999 during the height of the Internet bubble. He then ran Broadcom’s Wi-Fi networking chip division for five years and helped it take the leadership in a market full of dozens of rivals. 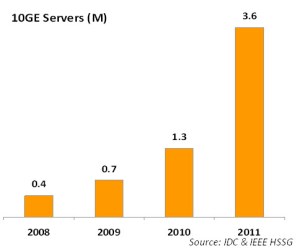 Woven Systems was founded in 2003 by networking veterans Dan Maltby and Burt Tanaka. They got a $10 million first round of funding from Palomar ventures and Goldman Sachs. The company raised a total of $25 million more in two subsequent rounds, giving it a grand total of $35 million raised. Thermond, who spent time as an entrepreneur-in-residence at Mohr Davidow Ventures, joined when the company launched its first products in the fall of 2007. Woven Systems has 75 employees.