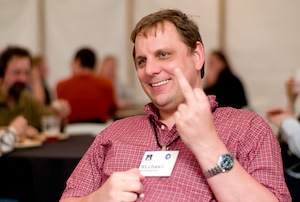 The Wall Street Journal is fighting back against an article today by TechCrunch’s Michael Arrington (pictured) that claims the newspaper pulled its punches when examining whether or not online social networks were inappropriately leaking personal information about users to advertisers.

TechCrunch had claimed that in a recent series on how Facebook and other social networks handled privacy breaches, the Journal had left out one notable exception as of Friday afternoon—its sister company, MySpace. (Both are owned by Rupert Murdoch’s News Corp.)

But by close of business Friday, the Journal not only ran a piece on MySpace as part of the series, it was up in arms over TechCrunch’s suggestion it would shy from taking on anyone in their immediate “family.”

“The claim is ridiculous in every sense,” Ashley Huston, senior director of communications for Dow Jones & Company, told me late Friday.

“Our groundbreaking series on digital privacy has scientifically examined cookies, beacons and other tracking technologies at every leading company, including WSJ.com,” she added.

As for the timing of the piece, which appeared after TechCrunch’s blog?

Well, when asked, Huston said the piece had been in the pipeline to appear today all along, and was not rushed down the pike because of any specific blogging pressure.

So they didn’t push the piece out the door to appear impartial?

Do you buy the Journal’s defense? Let us know in the comments.