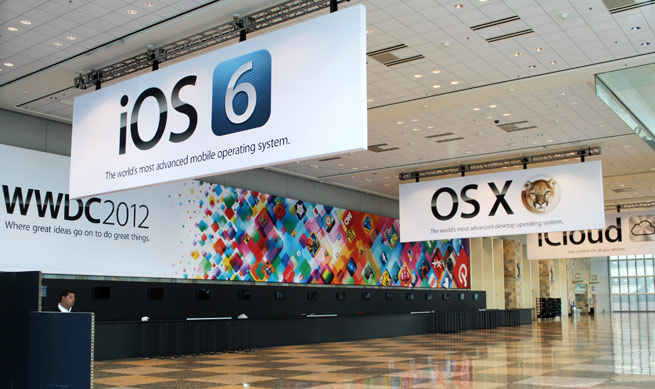 Spoiler alert! Apple is going to announce things on Monday morning at a keynote address kicking off the annual Apple World Wide Developer’s Conference (WWDC). Since speculation and rumors are half the fun (and annoyance) of reporting on Apple, we’ve collected some of our predictions for the big event.

We will be reporting live from Apple’s keynote address bright and early on Monday morning. The event begins at 10AM Pacific at the Moscone Center in downtown San Francisco, Calif. Follow our Tweets, and, on our website, our liveblog and WWDC news.

Let’s put on our detective hats and start with the clues. Above is a photo of the inside of Moscone center on Friday. There are three giant banners. What could it all mean?

iOS 6: Facebook, new maps, and Siri for the iPad

Apple’s first banner confirms the company will unveil its newest mobile operation system, iOS 6, but what will be inside? It looks like the latest version of the OS will add Facebook integration to go with its existing Twitter functions. Facebook integration could make an appearance in the Photos app and Apple’s App Store.

Apple is likely dumping Google Maps for its own mapping tools, one-upping the search giant by adding a 3D option. (In October, Apple acquired 3D-imaging company C3 technologies.) Turn-by-turn directions might be in the pipeline as well.

A new tracking tool to replace the UDID system was reported by the Wall Street Journal on Friday. The new system would continue to collect useful data for developers, but with improved privacy controls, such as opt-in tracking and stricter rules for developers to protect users.

Finally, there’s much speculation that mobile voice-assistant Siri will finally make an appearance on the latest iPad. There are also whispers that Apple will introduce a Siri API at the event, which would allow devs to integrate Siri functionality into their apps.

The Mountain Lion Mac operating system was first announced in February with a vague “Summer” release time. The Mountain Lion Developer Preview has been out in the wild and seen a few updates since then, which means most of the new features are already public. Apple will probably announce an official release date for the OS and a few new goodies. Any new features will match up with Apple’s quest to bring the best of iOS (especially iPad features) to the Mac, such as improved notifications.

An update to the iCloud service is pretty certain. A new iCloud feature could improve photo sharing and add social features to the mix, allowing friends to comment on and download your images. Reminders and Notes will likely be drawn into iCloud as web apps. Finally, videos could be synced between devices using iCloud and collected into a stream, like photos currently are.

Breaking from tradition, it looks like Apple will announce a Mac hardware upgrade at WWDC, featuring Intel’s new Ivy Bridge processors. The most popular possibilities are beefed-up, slimmed-down laptops across the MacBook Pro and MacBook Air lines, some with Retina displays. The desktop line could also get some fresh blood, with a speed-bumped iMac and Mac Pro.

Apple TV: Maybe an SDK, but no HD TV

This juicy and highly speculative rumor has been getting a lot of attention: Apple will unveil a software developers’ kit for Apple TV. Our own Dean Takahashi would love to see the Apple TV opened up for cloud gaming. The long longed-for iTV, an HD TV made by Apple, is highly unlikely at this point.

There will be orange juice, coffee, and pastries for attendees. Cool new apps from third-party developers will be demoed and an Apple TV ad will make its world debut. Tim Cook will be predictably charming, dressed in jeans and a possibly untucked black button down. Two-thirds of the way through the presentation, Cook will morph into a giant fire-breathing dragon and swallow Jony Ive whole before stomping out of the amphitheater, breaking through the Moscone Center’s glass wall, and fleeing into the warm mid-morning sky.