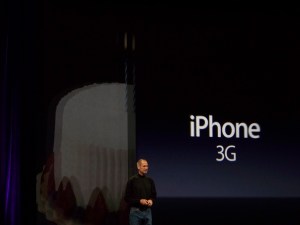 Finally, the mobile Monolith is here! It’s the iPhone, in all its 3G glory.

First, Apple CEO Steve Jobs took the stage and talked about the initial iPhone’s success: 6 million sales in the first year. It has 90 percent-plus customer satisfaction. The next challenges are, he says, 3G networks, enterprise support, third-party application support, more countries, and making it more affordable.

So of course, Jobs says, Apple is taking it to the next level with the iPhone 3G. The phone, so much anticipated over the past month, has a new flush ear phone jack. It has a camera. It looks sleek in the black model. It has a 3G network in addition to the much slower Edge network on the old iPhone. It loads a web page much faster, as Jobs showed in a demo. It takes 21 seconds to load a complex page on 3G and 59 seconds on Edge. 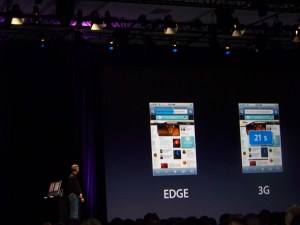 Those 3G speeds approach Wi-Fi, at 17 seconds. The iPhone 3G is 36 percent faster than the Nokia N95 and the Treo 750, which take 33 and 34 seconds, respectively. Standby time is 300 hours and the talk time on the 3G iPhone is five hours. Browsing can go on for five to six hours. Video is seven hours. Audio is 24 hours. 2G talk time is 10 hours.

Global positioning system navigation is now built into the iPhone (cheers). You can track things using the GPS and watch things moving on a map. All of the previously mentioned enterprise support and third-party apps are available on the new 3G iPhone. Jobs said they were going to try to get the 3G iPhone in 25 countries. The number of countries (shown on a Risk-like map with red colors during the demo to the tune of “It’s a Small World”) for the 3G iPhone will be 70 countries over the next several months.

Referring to his checklist, Jobs said, “We think we can check off more countries” on his list. The iPhone currently sells for $399 for an 8 gigabyte phone. Now a 3G iPhone with eight gigabytes will now sell for $199. The first 22 countries will have the iPhone 3G on July 11. A 16-gigabyte version is $299 and it will also be available in black or white. 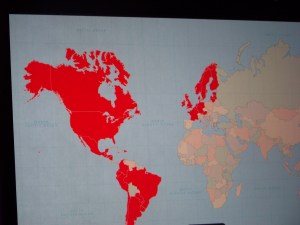 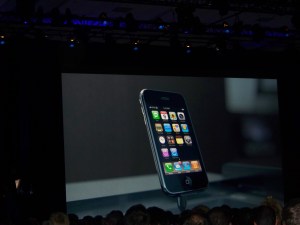 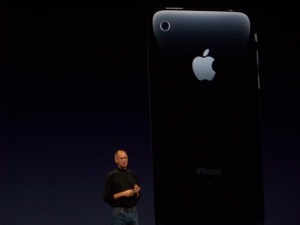