As some of you may know we decided to do things a little bit differently for our live coverage of Apple’s WWDC event today. We had the usual posts coming out with the big items, but for everything else, we were constantly updating a room we created on the social data conversation service, FriendFeed. The experience was pretty amazing.

I created the room last night and started posting some questions such as, “What do you think is the more important feature, 3G or GPS?” The room filled up rather quickly with both FriendFeed power users and bystanders alike. By the time Steve Jobs’ keynote kicked off today at 10 am, we had over 500 members in the room interacting with us. (Remember, that is just members who joined to interact with us. It’s like a giant chat room minus all the nonsense usually associated with chat room.)

And that is really the key here, the interaction. Unlike if we were to do a constantly updated live blog post where users would have to do the usual routine of posting comments, which is both relatively slow and are unlikely to get answered, FriendFeed allowed us to have a conversation with those who weren’t at the event.

When Jobs said something that I thought was interesting or important I would post it up there. Quickly, dozens of people would start discussing this or asking questions. I answered some of these questions, but other users answered them as well. Even though we’ll likely never use that particular room again after today, it was, if only for a brief moment in time, a community.

And that leads to the future. I absolutely think that ourselves or other sites should use this platform to cover other events. Today served to showcase a real hidden talent of FriendFeed — and the service knows it. Co-founder Bret Taylor loved the idea when we set it up yesterday and made sure the team was ready for any traffic surges today. Unlike Twitter, there was not one hiccup in the service during the entire event. I could post anything I wanted, whenever I wanted. The FriendFeed team did a superb job — as usual. 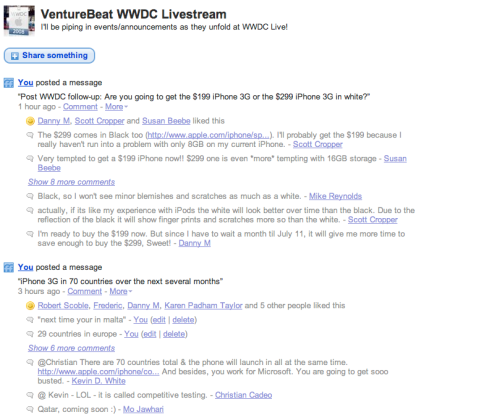 I have a couple suggestions though were I think things could be improved for future event coverage.

First, I would like to see a customizable embed widget for Rooms. While we had no problem testing this feature out on FriendFeed, we were basically requiring all of our readers to go to another service to see our updates. I could have embedded my feed on a page, but that would have left out fellow writers Dean and Eric who were commenting as well. I realize that people would still need to go to FriendFeed to participate, but those who simply wanted to watch the updates come in could have done so through an embed.

Second, a way to directly post media to rooms would be greatly appreciated for events such as this. Sure, I could have uploaded pictures to Flickr first and then posted the links, but that adds another step in an enviroment that is absurdly fast-paced. I did post the links to a few videos I took, but the live mobile streaming services are not yet available for play-in-page functionality on FriendFeed.

Overall this experience was a rousing success. Thanks to everyone who participated. We really appreciated all the kind feedback (some of it below — yes, I read it all). Hope to see everyone again in a FriendFeed room at the next big event. 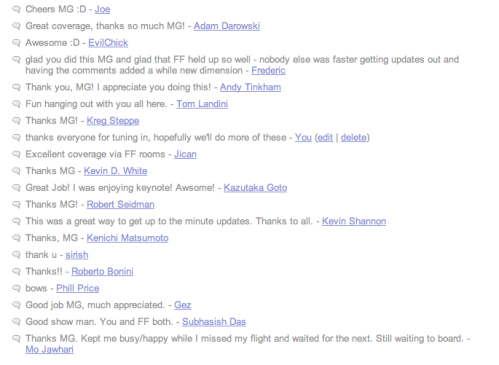