SHANGHAI — If anyone can help Microsoft be more successful with its Xbox One game console in China, maybe it will be Master Chief.

Microsoft’s Xbox chief Phil Spencer opened the ChinaJoy game trade expo with an announcement that the flagship title Halo: The Master Chief Collection will debut in August on the Xbox One in the Chinese market. That will be the first time that a Halo game has officially launched for a console in China.

Spencer said that this year would be the best ever for Xbox worldwide with the launch of games such as Rise of the Tomb Raider, Forza Motorsport 6, and Halo 5: Guardians in global markets. These big brands will help the Xbox One and Windows 10 platforms remain competitive against rivals on a global basis.

But in China, the launches of big games lag behind those of other territories. In the case of Halo: The Master Chief Collection, Microsoft launched it in November. It was probably lucky that Microsoft waited to launch it later in China, since the November software release was riddled with bugs.

Microsoft appears to have given up on cracking into Japan, the stronghold of Sony and Nintendo. But the software giant is more optimistic that China, which is expected to become the world’s biggest game market this year (according to market researcher Newzoo) will become an important market like the U.S. and Europe.

Speaking at the China Digital Entertainment Congress before the start of ChinaJoy in Shanghai, Spencer said he was proud to represent Microsoft in China, and he congratulated the nation on the growth of ChinaJoy, which draws an estimated 250,000 fans and has become one of the biggest game conferences in the world.

“The reason we are here today is not only to bring Xbox One to China but to open up the world to games made in China,” Spencer said.

He said Microsoft is making huge investments in China when it comes to hardware, intellectual property, and alliances with both large and small game publishers and developers.

“We believe it is incredibly important to open up the opportunity to all developers in China,” he said.

While he was optimistic, Spencer was also realistic. Console sales in China are expected to be around 550,000 this year, a small amount compared to markets elsewhere, according to market researcher Niko Partners.

“We know this is a long-term investment for Xbox,” he said. “We have teams here investing and are committed to growing this business slowly. But most importantly, we are doing it in collaboration with the industry. What is missing so far is a game developed in China, and games locally developed in China that are reaching large global audiences. Hopefully all of us together can strive for that success point. There is nothing more critical to me in bringing Xbox to China than unlocking the potential of developers here.”

“I think it is great that Sony has brought PlayStation to China,” Spencer said. “For both of us, we see the opportunity to bring console gaming to China in a very big way and foster the  development community to ensure that the best games reach the global audience.”

He noted that partner Perfect World of China had launched Neverwinter worldwide, including for the Xbox One platform.

Robert Xiao, chief executive of Perfect World, said in an interview with GamesBeat that he was happy to be called out by Spencer and that Perfect World would continue to invest in multiple projects for the Xbox One console. He said he expects Perfect World to release Xbox One games in China every year for the foreseeable future.

Spencer noted that Microsoft was throwing a big Halo party in Shanghai and that it would release Halo: The Master Chief Collection during August.

“Halo was instrumental in the development of Xbox Live,” he said, noting its importance to the Xbox community. And he said that Microsoft would also release Minecraft on the Xbox One in China. 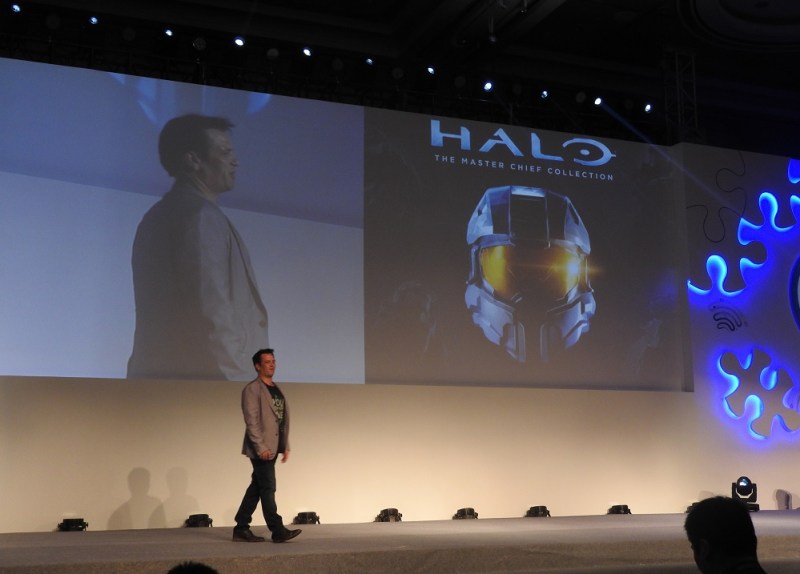 Above: Phil Spencer, head of Xbox, at ChinaJoy.