Two of the big talking points of MWC Barcelona this year are, undoubtedly, 5G and foldables. While Samsung elected to forgo MWC this year to host its own launch event that included a 5G phone and a new device with a foldable form factor (which also has a 5G variant), other manufacturers chose the annual technology event to showcase their 5G and foldable smarts.

Huawei unveiled the $2,600 5G foldable Mate X on Sunday, while fellow Chinese smartphone giant Xiaomi unveiled its first 5G phone — the Mi Mix 3 5G, which was most certainly not a foldable. Then came the Xiaomi Mi 9, which had some impressive specs of its own, but — alas — there was not a fold in sight. The “one more thing” at the end of its keynote elicited an excited chorus of gasps around the auditorium, only for Xiaomi to reveal the Mi LED smart bulb. And that was it.

For context, Xiaomi president and cofounder Lin Bin recently posted a video of himself using a foldable device, which is partly why all eyes were on the company’s keynote at MWC. But it wasn’t to be. In the wake of the event, VentureBeat sat down with Donovan Sung, Xiaomi’s global spokesperson and director of product management, to discuss its 5G efforts and why it decided to hold back on its foldable at MWC. 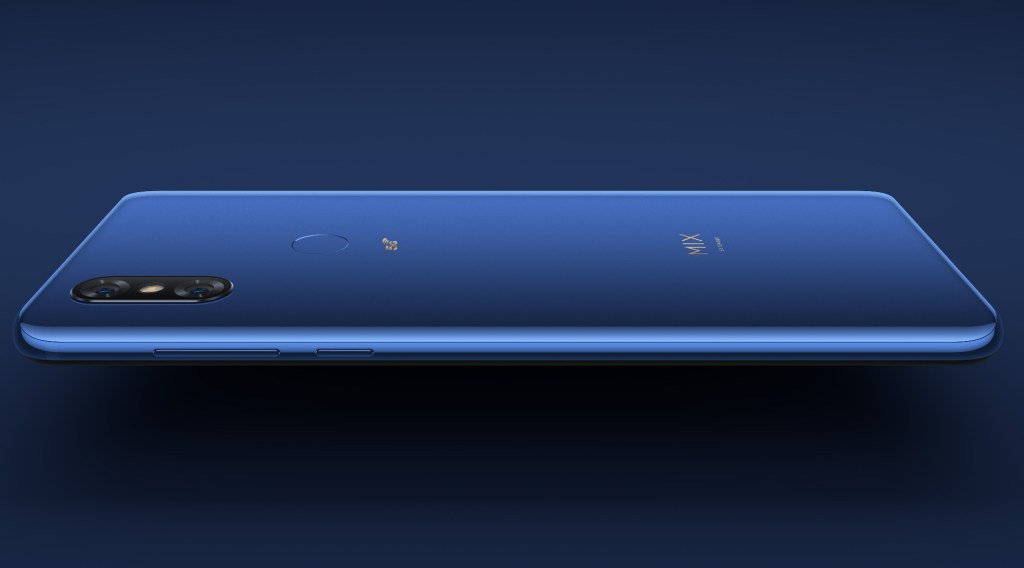 Though Xiaomi wasn’t the first company to unveil a 5G phone, it was the first to announce a price. At $680, the Mi Mix 3 5G is only around $50 more than the 4G edition, and for many this was a pretty reasonable price point for a technology that has been touted as a game-changer.

“We really wanted to make it as affordable as possible because our philosophy is very much always trying sell things at the most competitive price as possible, and also selling them at as close to cost as possible,” Sung said.

It’s worth noting that 5G devices need to be configured to make them 5G — they require different radio chips, modems, processors, and the like. And this ultimately needs more space, which leads companies to make some key design decisions in terms of what features to include, what to omit, and what to move around.

Now, if a company is launching a brand new 5G phone, then it arguably has more creative license in terms of specifications, but in the case of the Mi Mix 3 5G, people will naturally compare it to the Mi Mix 3 4G — they are intended to be the same phone, with the exception of their network compatibility.

“We wanted to preserve a lot of the key elements of Mix 3 that people liked, so we don’t want to change it into a completely new phone,” Sung noted. 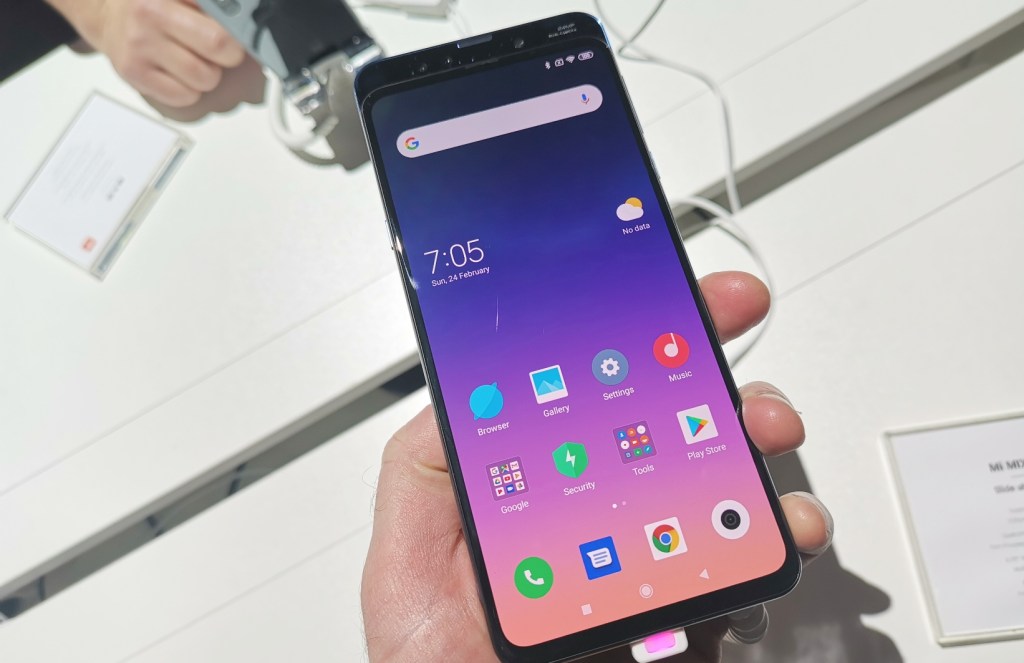 So are there any major differences between the two Mi Mix 3 devices in terms of size?

“It’s pretty much the same; it’s not noticeably much bigger or thicker,” Sung said, though the company hasn’t yet divulged the exact dimensions of the device. “We had to add a couple of new components to this compared to the normal Mix 3 — we’ve put in a new processor, and obviously we had to put in the X50 5G modem. We actually have a bigger battery as well.”

Indeed, the Mi Mix 3 5G sports a 3,800mAh battery compared to the 3,200mAh on the 4G incarnation — this will probably mean the device is a little heftier, and perhaps fractionally thicker too. But this decision was necessary, given that 5G networks will likely mean more drain on a phone’s power.

“We just really want to make sure that the whole phone is performing at peak efficiency,” Sung added. “We want a bigger battery to make sure the overall performance is as powerful as possible.”

Digging down into the details reveals at least one area where Xiaomi has sought to save a little space for larger components: the Mi Mix 3 5G is not a dual-SIM phone.

“Because it’s mainly meant to be a 5G phone, and we needed to save some space, yes — it is a single SIM phone,” Sung confirmed.

The Mi Mix 3 5G is expected to arrive in a “subset” of Xiaomi’s existing markets this summer, and we know this will include Western Europe. But can we expect Xiaomi to brings its phones to the U.S. anytime soon? According to a report last year, Xiaomi chairman Lei Jun indicated that it was looking toward late 2018 or early 2019, but it seems any such plans are on ice for now — something could still materialize over the next year or so, though.

“I think that’s another thing we will continue to look at for 2019 and 2020,” Sung said. “We’re in, like, over 80 markets globally. We already sell ecosystem products, IoT products in the U.S. through Amazon and Walmart, and through various [other] channels. In terms of smartphones, we don’t have an update [on a U.S. launch] at this point.”

And so Xiaomi’s key focus in the coming months will be to ready its 5G phone for a public launch, which is expected to be some time in May.

Many people have argued that 5G will have a less marked impact on smartphones than it will on things like smart cities, connected cars, and the broader IoT sphere. But as someone who has previously managed products for the likes of Microsoft, Spotify, and Google — including YouTube — Sung is adamant that 5G could prove to be a game-changer for smartphones in terms of how we use applications.

“We think 5G is definitely going to be a very big step-change for smartphones, and for the smartphone industry in general,” he said. “For example, the change from 3G to 4G — maybe certain applications that would be very tough on 3G became a lot more popular on 4G, such as ride-sharing apps. And even using Google Maps — that would have been much tougher in the 3G era. I used to work at YouTube, and it would honestly be very hard to watch YouTube continuously on a 3G network. Even using Instagram on 3G would have been tougher.”

So 4G helped certain services flourish on mobile, and the same can likely be said for 5G — high-definition (HD) cloud gaming and 4K video streaming are just two examples of what 5G will enable. But, ultimately, we don’t really know what kinds of things developers will come up with to leverage these new networks.

“There’s just a lot of applications that maybe we can’t even think of now,” Sung said.

The foldable elephant in the room

There is no escaping the one question that many people wanted answered following Xiaomi’s MWC keynote: Where is the Xiaomi foldable everyone was expecting?

“In terms of the specific launch time for this, I think we’d want to wait for it to be more mature before we announce that. But rest assured, we are trying a variety of different foldable concepts,” Sung said.

And that is perhaps a telltale sign of the broader state of foldable phones. Three companies at MWC had foldable phones on display, and all of them kept their devices in glass cases.

It seems that this technology is still a bit half-baked, and Samsung, Huawei, et al. don’t want the public to form a negative opinion just yet. But with anticipated launch dates of just two months away, keeping foldables in glass cases doesn’t instill a great deal of confidence that they will be ready in time.

On Sunday, Chinese smartphone company Oppo also teased a foldable device, but it stopped short of announcing any specific plans for it. And this is the approach that Xiaomi is adopting — rather than rush something to market that isn’t quite ready, it’s holding fire for now. And in truth, this is likely the best move; pushing something out into the consumer sphere that’s not ready for prime-time could set the foldable movement back.

“I think it’s very much part of our overall philosophy of wanting to be really at the cutting edge of technology,” Sung said. “That video [of Xiaomi president Lin Bin using a foldable] was us trying to demonstrate that we are trying new form factors. And we’ve also made decent progress on this, such that we felt comfortable sharing this concept video.”

But decent progress is different from market-ready, and thus we still don’t know when Xiaomi will bring a foldable to market. But at least we now know why — it’s just not ready.