Two days ago, we reported that LinkedIn had finally added profile pictures to their features list. Now a competitor, Xing, is announcing a slew of new features.

Xing already had profile images. Its users will now have the ability to include more personal information on their profiles, including details about past positions, and a field showing their motivation for being listed on the service (e.g., to find new clients or jobs).

The service is also opening up user’s profiles to mention their profiles on outside sites, including Amazon, eBay, Twitter, YouTube, Flickr, del.icio.us, Last.fm, Dopplr, Photobucket and Digg.

The people search engine Spock has made a similar move to incorporate profile information from outside sites. However Spock is much younger, and this could be Xing’s way of heading off incursions from Spock. LinkedIn, meanwhile, has kept a chilly distance from other Web 2.0 services.

The third new feature seeks to facilitate discussions between members. Members will be able to contact each other based on intention; a reporter and a salesman, for instance, would send different queries to other members.

Finally, users can dynamically edit their profile, changing information without going to a separate settings page.

Xing’s ability to quickly iterate and make design improvements may prove it as a worthy competitor to LinkedIn, despite its European origin. The site tends to differ in its friendlier appearance. 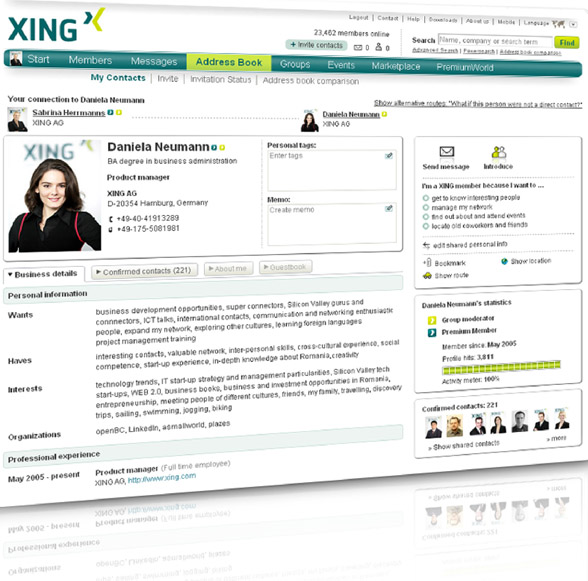