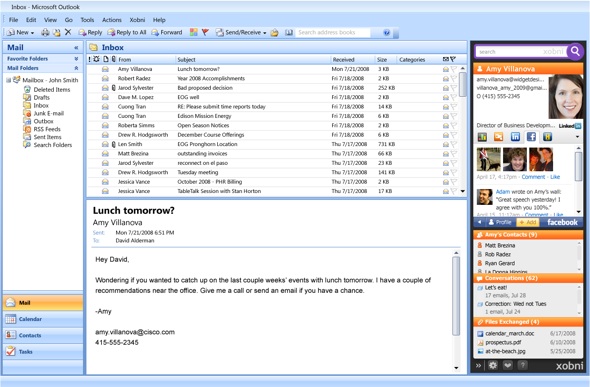 More and more communication is moving to social networking services like Facebook, Twitter, and MySpace. The migration is so pronounced that Facebook Era author Clara Shih and many others argue these sites are becoming our new email inboxes. But startup Xobni has been trying to move things in the other direction by using social data to improve email, and now it’s taking a new step in that direction with the incorporation of Facebook “streams” (previously known as news feeds) into Microsoft’s widely used email program Outlook.

This integration is enabled by the new Facebook application programming interface (API) announced this morning, which lets third-party sites and applications publish a user’s stream, with the user’s permission. It’s easy to see why a Xobni user would benefit from seeing not just a correspondent’s Facebook or LinkedIn profile (which Xobni already allows) but also their most recent activity on Facebook as published in their stream, since that might provide more up-to-date and relevant information. The San Francisco company says it has wanted to add this feature for several months but couldn’t until Facebook released the new API.

Xobni’s stream integration is scheduled to go live at 6pm Pacific Time tonight. I’m still not completely onboard with Bill Gates’ statement that Xobni represents “the next generation of social networking,” but his words make a little more sense with this latest announcement. The company has raised more than $14 million in venture funding.