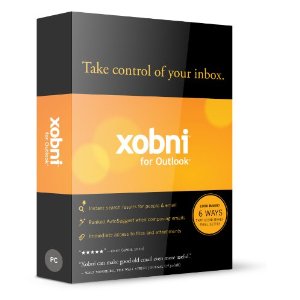 With Microsoft Office 2010 launching in retail stores this week, Forrester analyst JP Gownder has said that the popular productivity suite is shouldering “the defense of packaged software in general.” Here’s one sign that he’s right: Social email plugin Xobni, which was previously only available as a download from the Web, is releasing a boxed software version to be sold alongside Office.

That’s something you hardly ever hear startups doing nowadays — they all distribute their software via the web or mobile app stores like Apple’s. San Francisco-based Xobni said the idea of selling a packaged version “initially met with resistance and doubt,” but ultimately the opportunity was too good to pass up. With Office 2010 hitting stores, Xobni is an obvious extra purchase, since it enhances the Outlook email program (which is part of Office) with your contacts’ social data and fast search.

Being in-store builds brand awareness and validation. Someone could see the box, say oh I’ve heard of this, and feel encouraged to purchase because… if it is on shelf it is the real deal – automatically more trustworthy. While shopping online, you are at the mercy of the website you are buying/downloading from. In contrast, the retailer has your back for purchases made at their store. According to our survey, nearly two-thirds (62%) of respondents said they are more likely to buy software if they’ve seen it in stores. Even having a picture of the software box online will help convert more sales.

Xobni should be available in retail stores across the country, including Fry’s and Office Max, with some stores putting it on the shelf today. It will cost $29.95, the same as the online version of Xobni Plus. You can also buy it on Amazon.