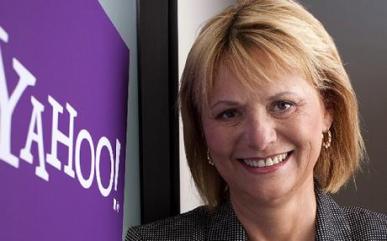 Rough-talking Yahoo chief Carol Bartz revisited her first year on the job in an interview with Bloomberg yesterday at Yahoo headquarters. “It was a little tougher internally than I think I had anticipated,” she admitted. Instead of an A, she gave herself a B-minus for taking too long to reorganize the company and close a search deal with Microsoft.

“I did move fast, but this is a big job,” Bartz told reporter Brian Womack.

Bartz, now 61 years old, made her name during 14 years from 1992 to 2006 as the head of computer-aided design software maker Autodesk. There, she was notorious for not participating in the company’s mellow, Marin County, email-instead-of-meetings, bring-your-bike-and-dog-to-work culture. Instead, she hired a car and driver to take her to and from work. She overhauled Autodesk’s play-it-safe attitude with a program called 3F, for “fail fast-forward.” Under Bartz, it became OK to take a worthwhile risk and fail, as long as you quickly put the failure behind and began moving forward again. As Autodesk’s revenues grew, employees came to respect the outsider in their midst. Forbes wrote that Bartz, whom the magazine listed as one of the world’s most powerful women, had “transformed Autodesk from an aimless maker of PC software into a leader of computer-aided design software, targeting architects and builders.”

Bartz’ arrival at Yahoo a year ago was even more of a shock to the troops than at Autodesk. She chewed out both employees and reporters whom she felt were in the way. Her penchant for swearing delighted many. “Let’s give this company some friggin’ breathing room,” she said at an early meeting. At a press conference in Manhattan, she harangued reporters and bloggers in the room. “When you get outside New York and Silicon Valley, everyone loves Yahoo,” she said. “I just want to transplant all of you guys out of your cynicism. What is wrong with you guys? Go be cynical about friggin’ Google.” At a kickoff meeting with employees, she promised to “drop-kick to fucking Mars” any of them caught leaking stories to gossip blog Valleywag or anywhere else.

Bloomberg recounts that Bartz shuttered many underperforming Yahoo properties, such as early-mover community site Geocities. She brokered a deal whereby Microsoft’s Bing will deliver search results and targeted ads to Yahoo users, while Yahoo will sell the premium ads for both companies. Federal anti-trust regulators are reviewing the deal, but industry watchers expect it will be approved this year.

Yahoo’s own forecasts now predict that profit margins will climb quickly, from 2009’s modest 6 perent to as high as 20 percent by 2012. In that light, Bartz’s B-minus grade proves she’s as tough on herself as on everyone else. She sees it as necessary. “A very good company kind of got buried,” she said. “It is coming out.”