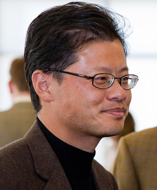 Speculation about this moment has been going for many months, but today it has finally come: Yahoo chief executive Jerry Yang is stepping down, according to Kara Swisher at AllThingsD. Yahoo also issued a press release confirming the news.

Yang will go back to being Chief Yahoo and a member of the company’s board of directors, while he helps the board find a new replacement. The move comes at a time when Yahoo’s share price has fallen to $10.63, less than a third of the share price that Microsoft had offered to pay for the company earlier this year. Yahoo’s ad revenues are declining, and the company announced last month that it’s laying off 10 percent of employees.

despite the external environment we face, the fact remains that yahoo! is now a significantly different company that is stronger in many ways than it was just 18 months ago. this only makes it all the more essential that we manage this opportunity to leverage the progress up to this point as effectively as possible. i strongly believe that having transformed our platform and better aligned costs and revenues, we have a unique window for the right ceo to take ownership over the next wave of mission-critical decisions facing the company.