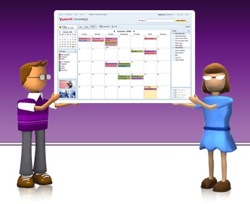 Yahoo announced today that it’s launching a new version of Yahoo Calendar, including features that should integrate it more seamlessly with other online calendars, easier to use and generally prettier.

With 8 million monthly users worldwide, Yahoo already has the most popular web-based calendar around, according to comScore. Google Calendar, for example, only has 5 million users. But that’s nothing compared to the vast amount of webmail users — Yahoo Mail, for example, has 285 million. (TechCrunch first reported the numbers, and comScore confirmed them for me). So Yahoo is understandably interested in converting a chunk of those 285 million people into web calendar users, too.

The technology behind the new calendar was built by the team from Zimbra, the email startup that Yahoo bought for $350 million last year. My editor Matt Marshall has praised Zimbra’s collabration tools before, so it seems like the right group to grow Yahoo Calendar’s user base.

So what’s actually new? Yahoo’s announcement points to four things — subscribing to any calendar that adheres to the iCalendar standard, dragging and dropping events without refreshing the web page, getting event reminders through email or SMS text messages and making your calendar prettier with photos from Flickr.

Aside from the Flickr integration (which is nice, but hardly enough to make a Google loyalist like me switch over), these are features that we’ve seen already with Google and other services. Still, as the market leader, Yahoo may not need to be a huge innovator, as long as it keeps up with the competition.

The other question is whether the features will help reach that untapped market that Yahoo is talking about. Again, I’m not sure anything here will strike folks as a “must have.” I also suspect online calendar adoption is just a matter of time, and has less to do with the calendars themselves. As more and more websites and online events offer ways to plug their data into your web-based calendar, and as webmail/calendar integration improves, the more useful those calendars will become. So far, Yahoo is in a good position to take advantage of that trend.