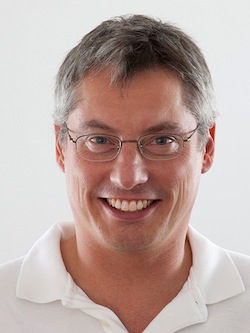 While engineering talent has been defecting from Yahoo in droves, some are sticking around the Sunnyvale, Calif. campus and moving up. Yahoo chief architect Raymie Stata has been promoted to chief technology officer, filling the role vacated by Ari Balogh when he left the company in April.

In an interview with Venturebeat at the Techcrunch Disrupt conference last week (before his promotion was announced), Stata talked about Yahoo’s roadmap for the future.

“Our goal is to create a personally relevant experience for our users,” he said. “Our technical focus is centered around that goal.”

According to Stata, this focus on personalization will meld Yahoo’s editorial strength with a new push to acquire and develop technology in the area. Strata described the editorial process on the front page as, “half man half machine.”

“Having that human voice in what we do is important, but bringing relevancy algorithms is one of the most exciting thing we’re doing technically,” he said.

The company’s personalization efforts also extend to its partnerships with Facebook. Commenting on the company’s integration of Facebook’s “Like” button on its Yahoo Sports property, Raymie said, “We’re experimenting with that. There’s a tradeoff, it gives them some data but it gives us visibility.”

Based on the results, Stata said the company might expand the integration to its other properties.

“A challenge for us is that we don’t smother them, that we don’t take our editorial processes and just drop it on what they’re doing that messes up their secret sauce.” Stata said.

With regards to its partnership in search with Microsoft, Stata disputed the notion that Yahoo is abandoning search. “If you look at the consumer search experience, that’s where the relationship with Microsoft is much more nuanced.”

While there was a lot of buzz around about a possible acquisition of Foursquare, Stata dismissed its purchase of Indonesian mobile startup Koprol as a substitution.

“Koprol is a combination of Yelp and Foursquare,” Stata remarked.

Stata indicated that Koprol would most likely be introduced in markets where there wasn’t an entrenched player like Foursquare or Gowalla. Overall the acquisition fits in with the company’s overall customization push.

“Local and hyperlocal we want to optimize around those variables,” Stata said.

Stata joined Yahoo in 2004 when the company acquired his startup Stata Labs. Stata has played a vital role in the development of Yahoo’s search, advertising, and cloud computing products. He will now report to chief product officer Blake Irving as Yahoo integrates recent acquisitions like Associated Content and incorporates technology from partnerships with Facebook, Microsoft and Nokia.