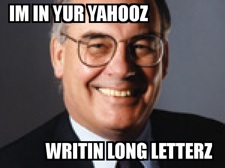 If you’re Yahoo and you have to respond to billionaire investor Carl Icahn’s letter telling the company he was launching a proxy takeover, you don’t have too many options — you’re going to look weak no matter what you say. The way I saw it there were two options: First, don’t respond. Maybe just pretend you didn’t get the letter and didn’t check the Internet today. Or second, come back with a response so long that it will bore Icahn out of wanting to acquire you. Yahoo chose the latter.

The response, by Yahoo chairman Roy Bostock is really quite incredible when compared to the letter Carl Icahn sent. Icahn wrote four paragraphs to Bostock. Bostock wrote thirteen in response.

So what does it say? Well, I think everyone knew what it would say before reading it. Yahoo disagrees with Icahn’s assessment that Yahoo is better off in Microsoft’s hands. It claims to have been very open to a deal with Microsoft and in fact met with them seven times to try and make something work that would be beneficials to both sides.

Unfortunately, according to Bostock, it was Microsoft, and not Yahoo in the end who was unwilling to compromise. As such, Microsoft walked away. Bostock contends what while Icahn asserts Yahoo’s board is incompetent, the board was very much involved in all stages of negotiations and is still actively looking at ways maximize shareholder value.

This “maximizing shareholder value” has been a running theme played by Yahoo throughout this ordeal. Unfortunately for Yahoo, Icahn is now one of its largest shareholders and he clearly doesn’t feel that his investment has been maximized.

This is really all just back and forth and spin at this point. It’s two sides who have completely opposite viewpoints. It could get interesting again if Google re-enters this picture — perhaps this will push them back into a full pursuit of the search advertising deal with Yahoo that it may have been cooling on.

One thing is for certain: Yahoo is in trouble.

Note: I just had to give Bostock the same LOLcat treatment I gave to Icahn.