In light of the recent Google/Yahoo alliance, analytical company Hitwise decided to update a chart it did earlier this year that compared Yahoo’s U.S. search audience to Google’s.

“Struggling societies,” “Urban essense” and “Blue-collar backbone” are three large segments that trend towards Yahoo. Hitwise defines these as:

Google, meanwhile tends to attract groups dubbed “Affluent suburbia” and “Upscale America.” These are defined as:

Affluent Suburbia: The wealthiest households in the U.S. living in exclusive suburban neighborhoods enjoying the best of everything that life has to offer.

Perhaps not surprisingly given these demographics, Google tends to attract users who spend much more money online. But now, it appears Google may be able to better target these less affluent groups with its advertising programs thanks to the Yahoo deal.

It is also worth noting that Google controls a much higher percentage of search in the U.S. than Yahoo does, so while opening greater access to certain markets is promising, it likely won’t be a dramatic bump for Google. 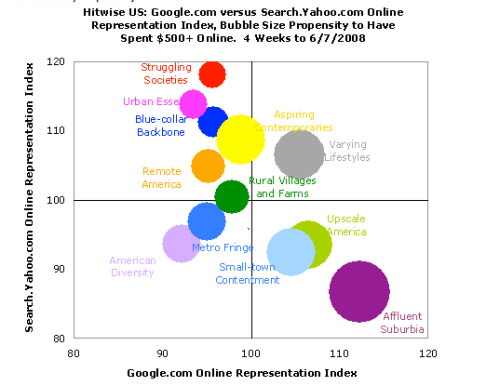