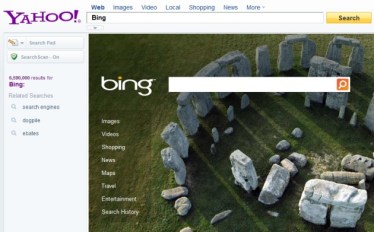 Yahoo’s transition to using Microsoft’s Bing for powering its searches begins this week for users in the U.S. and Canada, the company announced in a blog post today.

Yahoo will start to replace its search back-end with Bing’s starting at the end of the week, at which point search results will show up with a “Powered by Bing” descriptor at the bottom (I’m already seeing this in my searches). But even though the results will be coming from Bing, Yahoo stresses that its typical user experience will remain the same. The only thing users may notice is the Bing indicator — and hopefully better search results. Bing isn’t expected to fully replace Yahoo’s search back-end globally until 2012.

Once the transition is complete, Bing will account for 31.6 percent, or 5.2 billion, of searches every month, according to Microsoft. But as All Things Digital points out, the latest Comscore metrics show that number may be closer to 28.1 percent. It’s an improvement from Microsoft’s current 11 percent search share, but still significantly less than Google’s leading 65.8 percent.

Yahoo announced a year ago — just two months after Microsoft launched Bing — that it would be giving up on its own search technology, and that it had made an agreement with Microsoft to have Bing take over its search duties for the next 10 years. Microsoft’s AdCenter platform will drive self-service ads for both companies, while Yahoo is free to use its own technology and data for display advertising and other business areas. Both companies will keep separate display ad businesses and sales forces.