Yahoo, the media portal that is under pressure to catch up with Google, has agreed to acquire BlueLithium, an online advertising company, for $300 million in cash. 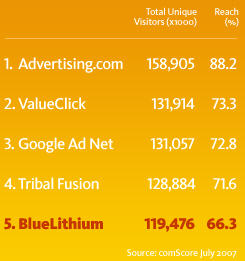 BlueLithium, based in San Jose, Calif, but with offices around the globe, is a large, fast-growing online global ad network. It’s just the latest company to be gobbled up by Yahoo and its competitors Google and Microsoft, as the three seek to attain size in an industry where size matters.

Yahoo bought Right Media for $680 million in April, right after Google bought DoubleClick and sparked an unprecedented acquisition binge in the sector. Old media companies have been forced into the action as well (see here and here).

BlueLithium is the fifth largest ad network in the US and second largest in the UK with 145 million unique visitors each month, according to comScore Media Metrix. The company collects ads from advertisers, who pay BlueLithium to place them on Web sites — with the advertisers getting feedback from BlueLithium about how the ads perform and how many people click on them.

“BlueLithium’s products, technology and team will be an integral part of our drive to build the industry’s leading advertising and publishing network,” said Jerry Yang, Yahoo’s chief executive officer, in a statement.

BlueLithium says it can target audiences based on their consumption interests, and that it can remarket ads to consumers across the Web who have interacted with an ad or web page. It does so by placing a cookie on you browser when you visit certain sites that it has relationships with.

BlueLithium’s network management technology may also help Yahoo, the company said.
The transaction is expected to be completed in the fourth quarter.

This was a very fast ride for BlueLithium, only three years old. Venture firms WaldenVC and 3i are believed to have done particularly well from their early investment in the company in February 2005. They invested $11.5 million.