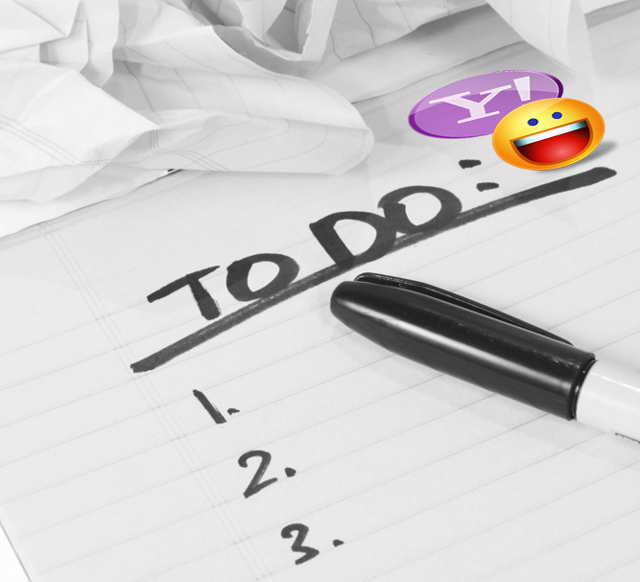 After several years of floundering and a four-month search for a permanent leader, Yahoo has appointed former PayPal president Scott Thompson as its new CEO. While Thompson doesn’t officially start until next week, we’ve compiled a handful of tasks worthy of appearing on a hypothetical “To Do” list of things to bring Yahoo back to the level of titanic power it enjoyed a decade earlier.

Yahoo has been in turmoil since it fired former CEO Carol Bartz, who was punished for not increasing revenues and losing advertising share from Facebook and Google. While the company has made a smart move to partner with Bing on search and advertising results, it has been stagnant with dull-looking products. Next to Google, Yahoo looks like an old maid.

Here’s how Thompson can revive the company:

1. Bring Yahoo email up to par (and kill Yahoo Mail Plus)

In terms of legitimate, active accounts, Yahoo email is more popular competitor Gmail — with 302 million users globally, according to Yahoo’s statistics. But we’ve not had an update on usage numbers from Google in at least a year, and I’m assuming Gmail will eventually win this battle. (If you disagree, ask any overly active web user with both accounts which one they prefer.) Both of them are far behind Microsoft’s Hotmail client, which reported 360 million unique users in July.

Yahoo mail still doesn’t allow people to use their accounts as an all-purpose e-mail utility for work, enterprise and recreational unless they pay for a premium subscription — meaning if you want to hide ads, gain offline access via POP, use more than 100 filters/labels or forward your mail to other accounts — you have to pay $19.99 annually. Yes, Yahoo Mail Plus gives you access to some helpful things like live customer support and disposable email addresses, but these features hardly give the service an advantage over competitors.

I don’t know how much revenue Yahoo generates from its premium mail subscriptions, but eventually Gmail and Hotmail will edge the company out entirely. Customers aren’t going to want to pay for something your competitors (namely, Gmail) are giving them for free. What Yahoo needs to do is seriously deconstruct its email service and rebuild it with a long-term strategy.

Flickr rose in popularity because it amplified the ability of photographers to store, catalog and share their hobby. Eventually, Yahoo saw its potential and purchased the company. And many critics have argued that’s pretty much where the service went wrong.

Fast forward to 2012, and we see that the iPhone is now the most used camera for uploading pictures to Flickr. We also see that Instagr.am, a startup that gives users filters for pictures they take with mobile phones, has pulled in 13 million users and been named Apple’s number one iOS app of 2011. The obvious pattern is that Flickr isn’t mobile enough. Sure, Yahoo managed to push out an Android app, as well as a decent mobile site overhaul for Flickr, but the bottom line is that people aren’t patiently waiting for the service to adapt to their needs. Eventually this is going to eat away at Flickr.

The company needs a happy medium between Flickr and Instagr.am — and it needs it fast.

Yahoo desperately needs another consolidation plan — something that combines all of its social products into one nice, neat package the way Google is attempting to do with Google+. It’s not enough for Yahoo to provide integration of these services. The company needs to take (another) hard look at what products and areas it’s successful in, and concentrate on them entirely.

This also means the company will inevitably have to trim the fat. While I absolutely love services like Yahoo’s IntoNow, a social check-in service for people watching TV frequently, I don’t see the product going anywhere in the future. Yahoo has a history of building great services and not knowing quite what to do with them, leading the company to do nothing more often than not. It should consolidate IntoNow into Yahoo’s other social services and kill things like Yahoo Deals and 4cast.

Many times I’ve started writing a short article about Yahoo and wrestled with myself over whether to call it a tech company or media company. It’s both, but Yahoo sure doesn’t make it easy to distinguish its two identities. The company has several very popular media channels for sports and lifestyle/culture that aren’t being used to their fullest potential.

Also, partnerships between Yahoo and other services (Monster.com, Match.com, etc.) are mixed in with all the other Yahoo channels, which probably earns the company lots of money for placement, but isn’t very desirable for the overall user experience. Yahoo should reorganize these channels, affiliate services and products into something more manageable. And that brings me to my next and final item on the list…

5. Clean up the homepage

Yahoo’s homepage is extremely busy. Until now, I’m quite positive this strategy was intentional. It has a somewhat complete list of apps/services in a left sidebar, tabs along the top, trending topics on the right along with must-see trending videos, a collection of recent and interesting news down the middle. If Yahoo’s homepage was a road, pedestrians would be strictly prohibited.

I’m not suggesting that Yahoo needs to turn itself into Google by stripping everything off the homepage except for a prominent logo and a search box. Yet, the company can certainly do a better job of streamlining its services into something more appealing than the current offering.

Yahoo’s new CEO has his work cut out for him. The company has plenty of decisions to make regarding its premium subscriptions versus ad-supported freemium business models. It also needs a drastic reorganization and a new purpose (like Google CEO Larry Page’s social initiative).

Thompson previously said the company was going to use its vast collection of data to enhance its suite of services. But to do so effectively, and for people to notice, Yahoo will need to do some heavy lifting.