Although Google remains the 800-million pound gorilla in the global digital ad market, Microsoft will creep past Yahoo’s market share this year.

That’s the outlook today from industry research firm eMarketer. Yahoo’s market share will drop from 2.86 percent to 2.52 percent in 2014, even though it will be showing a small increase in revenues.

“The big takeaway is that Yahoo’s ad revenues have remained relatively flat, causing them to drop down in rankings,” eMarketer PR director Dan Marcec told VentureBeat.

They’ve “tried to reconfigure their ad offerings,” he said, “but within the past two years they haven’t made any real [progress.]”

Why, given their effort? “It takes a really long time to rebuild something that large,” Marcec said.

Microsoft’s share will grow over 20 percent, reaching 2.54 percent. But both Microsoft’s and Yahoo’s shares are drops in the proverbial bucket compared to King Google, who reigns with 31.45 percent.

Facebook takes second at 7.72 percent, an increase of nearly two percent over last year – the largest increase for U.S.-based companies in the forecast. Twitter’s market share will grow by more than half, albeit from last year’s tiny 0.50 percent to this year’s projected 0.79 percent. 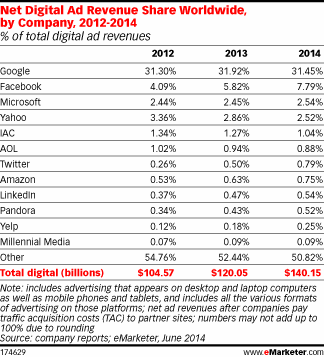 As in so many sectors in the online world, mobile is the key driver. Earlier this month, eMarketer projected that mobile ads will pass ads in newspapers, magazines and radio this year, for the first time. Within four years, spending on mobile ads will zoom to over a quarter of all ad spending in all media.

Google accounts for over half of all mobile ad dollars, although its actual market share has slipped very slightly year over year. Twenty-two percent of that $32.72 billion global mobile ad market will be handled by Facebook, a jump of nearly five percent over last year.

“Mobile ads are doing great for Google, Facebook, and Twitter, the companies that are growing the fastest” in digital ad revenues, Marcec told us.