Forget the brackets in the office NCAA Tournament pool. This year, Yahoo is offering an application drawing on the wisdom of crowds to make sense out of March Madness.

Yahoo Labs last week launched Predictalot into beta, an application that takes predicting the winners and losers in the tournament “to entirely new extremes.” 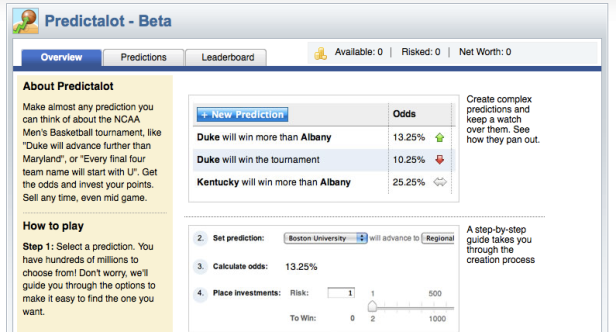 “You can invest virtual points on almost any prediction you can think of about the men’s college basketball tournament, like ‘Duke will advance further than Texas,’ or ‘Every final four team’s name will start with the letter U,” according to the Yahoo web site. “You can keep your predictions and see how they turn out, or you can sell them at any time, even while you’re following the action on the court. How does that work? Think of your predictions like stocks that can be priced, sold and traded (for virtual points, of course).”

Predictalot automatically calculates and recalculates the odds of the crowd’s various predictions as the tournament progresses. Individual predictors accruing the most points based on making the right predictions will earn a spot on the Predictalot leader board on the site.

Yahoo blogger Lucas Mast says Predictalot is an example of what Yahoo Labs is calling a “combinational prediction market,” in which participants file any “propositions” they want to related to the tournament. With 63 games in the tourney, there are 9.2 quintillion possible outcomes — 2 to the 63rd power, to be exact, wrote David Pennock, another member of the Predictalot development team.

This prediction market could eventually be used to forecast how an election with five candidates in the race will turn out, how an NBA season will end among the 30 teams, or which of the 3.6 million possible outcomes of a 10-horse race is most likely, Pennock noted.

Yahoo built the first version of Predictalot during an internal Yahoo “Hack Day,” and built the public version on the Yahoo Application Platform.

President Barack Obama will likely be busy this week shepherding the health care reform bill through Congress, so he may not have the time to fill out his NCAA bracket as he did his first year in office. But if there’s a mobile version of the app some day, maybe he’ll be able to sneak a peek at Predictalot on his BlackBerry between meetings.