Yahoo search gurus gave a presentation at the offices of OutCast PR today titled, “End of the 10 Blue Links.” You can read TechCrunch’s liveblog of the event, but here’s the shorter takeaway.

Yahoo, like Google, is moving away from returning Web pages that match keywords. Instead, it’s trying to automatically determine what it calls the “intent” of the user. What is the user trying to find, or find out? And instead of returning a singular URL as a result, it’s bundling information as “objects” that collect information from the real world and connect it to online data.  A search for a restaurant, the easiest example, would return an object to the Yahoo user: The restaurant, represented as a roll-up of its name, location, map, phone number, business hours, reviews and — almost forgot! — a link to the restaurant’s website. The top result would be geographically targeted to the user’s location, making a search for “Starbucks” actually useful. 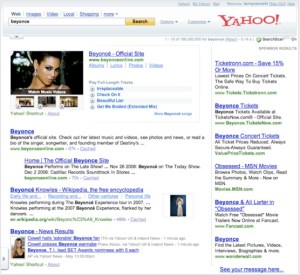 The good/bad news is that many of the examples in Yahoo’s demo weren’t much different from Google’s results for the same search. Restaurant results were almost identical. Yahoo does put video clips in the “object” result for celebrities, which Google doesn’t do despite its access to YouTube’s entire archive.

Microsoft is also close to launching new search enhancements that include similar moves toward one bundle of multimedia info rather than links to websites.

The driver for this massive change is the shift among Internet users from desktops to mobile handsets. Nokia, BlackBerry and iPhone users don’t have the screen space to scroll through pages of results. Nor do they have the time to click through to each one in hopes it has the info they seek.

Yahoo scientist Marc Davis made clear to me that Yahoo isn’t going to cut over completely from today’s “ten blue link” to the “one multimedia object” result. They’re doing meticulous user testing to decide where and how to gradually merge the different types of results together to deliver the best results based on who’s searching for what, from where, and when. You might get different results on a weekend than you would on a Tuesday.

I could nitpick Yahoo’s presentation. It followed one example, a search for just “Beyoncé,” with a mobile example based on the premise that “one of the most important things in people’s lives is flight info.” I’m trying to imagine the Venn diagram overlap of People Who Type “Beyoncé” Into Search Engines versus People Who Need Flight Info A Lot. That’s gotta be near zero.

More seriously, Yahoo’s presenters didn’t have an answer to the question of how their ad sales model would change to match the fact that their results are no longer targeted directly to keywords. “We’re going to let the market figure that out,” one presenter answered. What he really meant: “We don’t know.”