Seattle-based Yapta, a service that informs you when the price of plane tickets you want drops, has raised $2.3 million.

The company is one of many trying to provide ways for people to save money on airfare, but its approach is a bit different: Yapta lets you bookmark, or “tag” individual flights and will e-mail you immediately when any of them become cheaper.

Sites like Kayak and Sidestep let you search hundreds of travel sites for the cheapest flights. Farecast, however, is the closest to offering something similar. It lets you track specific flights you’re interested in, and make predictions about whether prices are headed up or down.

Yapta works through a downloadable plug-in for Internet Explorer (support for FireFox is on the way). Once it is installed, whenever you select a flight from Travelocity, Expedia, Orbitz, or one of the eight US airlines Yapta supports, a button that says “Tag with Yapta” appears below the price. Clicking this will add the flight to a list you can access later on Yapta’s site. Yapta then automatically checks the airfare multiple times per day for all of the flight’s you’ve tagged, so if any of prices drop, it will let you know before it’s too late. If the price goes down after you’ve made the purchase, Yapta will inform you of this, as well, and will tell you how to get a refund or travel voucher from the airline.

Yapta is aimed at the “value-conscious business travelers,” that book their own flights online, and says that its service has saved its users an average of $109 dollars over three months. It intends to make money through targeted advertising and, down the road, a premium service that will allow you to purchase your tickets without leaving its page.

The funding round was led by First Round Capital, and included investments from Voyager Capital, Swiftsure Capital and Bay Partners and brings the total invested to $3 million. 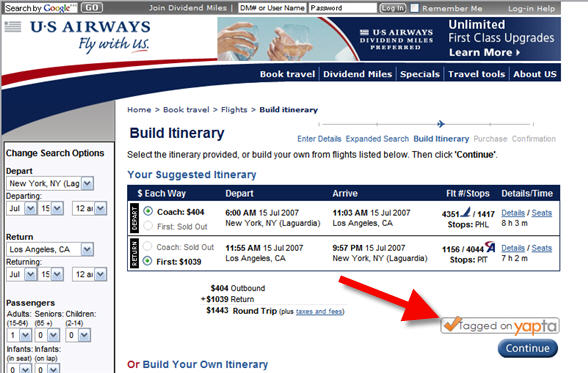