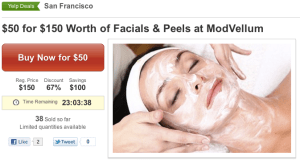 Local business review aggregator Yelp is going back to its roots. The company is scaling back its year-old Yelp Deals service, which was designed to compete with daily deal giant Groupon, and focusing its resources on more on user-based reviews.

Today Bloomberg reported Yelp will reassign half of its Yelp Deals sales staff. Yelp calls the move a “minor realignment” of 15 people within the sales organization. In other words, Yelp isn’t wholly giving up on deals.

“Over the course of the last year we have tested several iterations of the daily deal,” said a Yelp spokesperson in an email to VentureBeat. “[We] have recognized that small businesses want to participate in sustainable marketing campaigns that give them exposure to new consumers who will likely become loyal or repeat customers. Yelp Deals is one offering in our portfolio of ad products that we present to small businesses, it is not our core product.”

Daily deals are the core offering of Groupon and LivingSocial, the top two companies in the industry. Their success has encouraged hundreds of companies to enter the online-coupon market. But while 36 daily deal sites opened during the month of July 2011, 38 closed, reports research company Yipit. Yipit also reports the North American daily deal industry had a seven-percent drop in revenue from June. The research firm notes Yelp offered 60 daily deals in both June and July, but only 30 deals in August. Bloomberg notes Yelp currently makes about $10,000 per deal, compared with more than $30,000 at the beginning of the year.

Dwindling sales numbers and (slightly) fewer participants signal the daily deal industry is hitting some speed bumps. The best daily deal companies, not just Groupon and Livingsocial, are going to come out on top of the heap. Yelp’s move to scale back on deals isn’t a sign the company is afraid of a daily deal industry shake-up. It could be an indication the company is slimming down and refocusing while working towards an initial public offering (IPO).

“Yelp would benefit from more diversified revenues as it heads into its IPO,” says Greg Sterling, the founding principal of Sterling Market Intelligence, a consulting and research firm focused on online consumer and advertiser behavior. “Its core value proposition and main focus is still consumer reviews. There’s a great fit, in theory, between Yelp and deals.”

Groupon would benefit from Yelp backing out of deals. In fact, it could be a sweet partnership: “Daily deals is performance based — it’s just not as easy of a business to scale and Yelp is better off letting someone like Groupon pay to access its user base for those deals,” says Sucharita Mulpuru, vice president and principal analyst at Forrester Research. “Sourcing deals is a terrible business. Expensive, laborious, time-consuming and now competitive.”

For now, Yelp says its staying in the game. “We will continue to offer Yelp Deals as they are effective for reaching a highly targeted consumer base,” said the Yelp spokesperson. The company will do this with a self-serve platform for businesses to set up their own Yelp Deals on their business page.

Yelp isn’t the only company shrinking away from the daily deals business. Facebook announced this month it will shut down its local-discount feature, five months after it got started. But it’s important to note that neither Yelp nor Facebook are totally abandoning deals. Why not keep a toe in the water? Just don’t jump in.