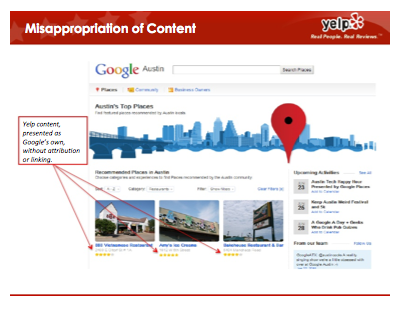 Since Google now directly competes against Yelp in terms of reviewing local businesses via its Places product, Yelp agreed to the FTC’s request to discuss its experiences with Google’s conduct.

“We have responded to these requests and told officials that we believe Google has acted anti-competitively in at least two key ways: by misusing Yelp review content in their competing Places product and by favoring their own competing Places product in search results,” Yelp CEO Jeremy Stoppelman writes in a blog post. “We have been invited to participate in a Senate Judiciary Subcommittee on Antitrust hearing about this issue later today.”

As Yelp points out in several visually annotated slides, Google doesn’t actually attribute its use of Yelp user reviews in its Places product. The search giant lists both the total number of reviews for a local business and reviews about the business itself, but doesn’t disclose that the reviews came from Yelp and not its own service.

Also, Google previously had a partnership with Yelp that allowed it to use Yelp reviews as complimentary to other Google services. The partnership, however, was apparently terminated years ago, which prompted Google to change its policy regarding user reviews. With that kind of history, it will be difficult for Google to argue against anti-trust accusations.

The company has placed its written and verbal testimony online, as well as an outline of its relationship with Google.

Google was unavailable for immediate comment about Yelp’s testimony.