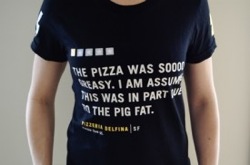 Yelp is trying to make business owners a little less cranky about getting dissed on the popular review site by allowing them to respond publicly to reviews they believe are inaccurate.

The site, which is best known for its restaurant reviews, helps business owners by giving them online exposure without paying for expensive ads, and its reviews can highlight positive feelings from a business’ supporters. At the same time, it can be pretty frustrating when some random person trashes your business, especially if they say something that’s just factually wrong in the process. Yelp’s occasionally fraught relationship with business owners has surfaced in cases like dentist’s lawsuit against a negative reviewer (which was settled) as well as rumors that Yelp will take down negative reviews, for a price.

So will the next step in that relationship be all-out brawls between business owners and reviewers, captured on the Yelp site for our amusement and edification? Well, no. Yelp Communications Director Stephanie Ichinose tells me business owners will only be allowed to correct inaccuracies or offer additional facts, not argue with reviewers. Yelp users will be able to flag comments that step outside those boundaries for removal. (You can see a mock-up of the owner comment feature below, but Yelp says it isn’t finalized.)

Yelp already offers other features to give business owners a fair shake, such as a space in their profiles for special offers and a way to send private messages to reviewers. The latter feature has been used by thousands of owners, Ichinose says. (It’s interesting to compare Yelp’s approach to the revamped Citysearch site, which gives equal prominence to editorial content, messages from business owners, and user reviews.) The new owner comment feature seems fair, and probably a more manageable way to address accusations of inaccuracy than actually trying to determine the truthfulness of each claim.

Of course, if you’re a business owner who really wants to argue, I suppose you could just try to impersonate a normal user, but that’s always been a possibility. If you ever find yourself tempted in that direction, I urge you to think of something more cleverly passive aggressive, such as Pizzeria Delfina‘s Yelp review T-shirts.