Yelp has a lot of data. In the nearly 15 years it has been around, the crowdsourced local search service has aggregated key info about tens of millions of dentists, hair stylists, mechanics, restaurants, and local hot spots from 34 million monthly smartphone app users and 75 million monthly mobile web users. Those folks have contributed plenty of reviews — more than 171 million by the end of Q3 2018 — but perhaps more importantly, they’ve helped highlight openings and closings that might otherwise have gone unreported.

It’s these crucial data points Yelp used to compile the Yelp Economic Average (YEA), a new measure it describes as a “benchmark of economic strength.” For 30 representative categories, chosen for their consistency, the San Francisco company combined consumer demand on Yelp with business openings and closings to tabulate an overall YEA score and YEA scores for regions across the country. The categories were then consolidated into eight root categories — restaurants, food, nightlife, local services, automotive, professional, home services, and shopping. These contributed to YEA scores based on their share of the economy, as estimated from the U.S. Census Bureau’s County Business Patterns reports.

Above: The Yelp Economic Average categories.

“YEA … is a measure of the Yelp economy, which underpins the local economy,” they wrote in a blog post. “YEA is inspired by … major stock indexes [such as the The Dow Jones Industrial Average, the Standard & Poor’s 500 Index, and the Nasdaq Composite Index]. They track the stocks of major companies, while YEA tracks the fortunes of businesses … drawn from the pillars of the Yelp economy: restaurants, retail, and service companies.”

Yelp says that over the past quarter, YEA fell by more than two points from 100.7 to 98.5, in part due to declines in the professional, home, and local services categories. (All YEA scores are calculated relative to the fourth quarter of 2016, for which the score was set to 100.) Bialik and Hansen note that the decline in the third and fourth quarters reversed gains in the prior two quarters, and that dips in these sectors might be an early sign of an economic downturn. 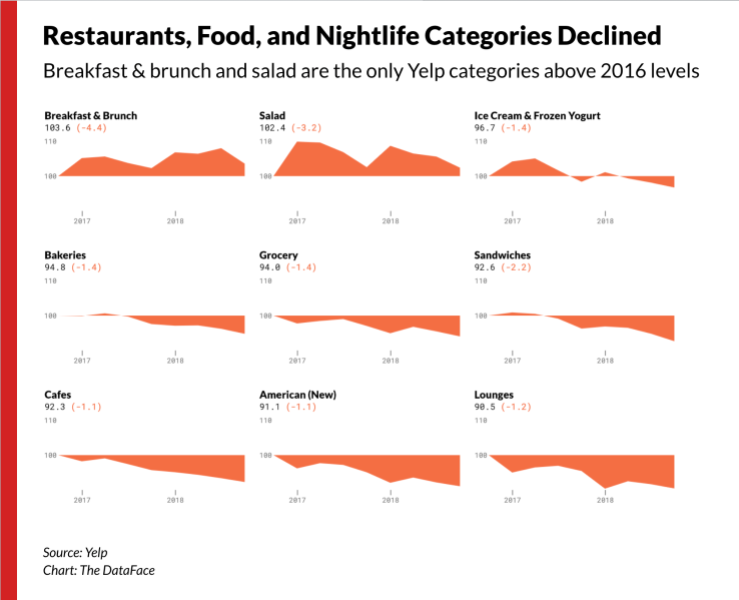 Above: Yelp’s data shows a decline in the restaurant, food and nightlife categories.

Only gas stations and self-storage facilities saw an increase in their respective YEA scores in Q4 2018. (Self-storage tends to be countercyclical, Bialik and Hansen noted, and to thrive when “people downsize homes or need to upsize homes but can’t.”) The rest of the 30 industries represented — including high-end retail, professional services, bars, and coffee shops —  experienced a decline.

Divorce law saw a dip of six-tenths of a point overall, interestingly, but a slight uptick in the Midwest (of 5.4 points). (Bialik and Hansen attribute the drop to millennials waiting longer than previous generations to get hitched.) Sandwiches and baked goods fared worse, with fourth-quarter dips “exacerbating long-term declines,” as did computer businesses, PC repair shops, and IT service suppliers. 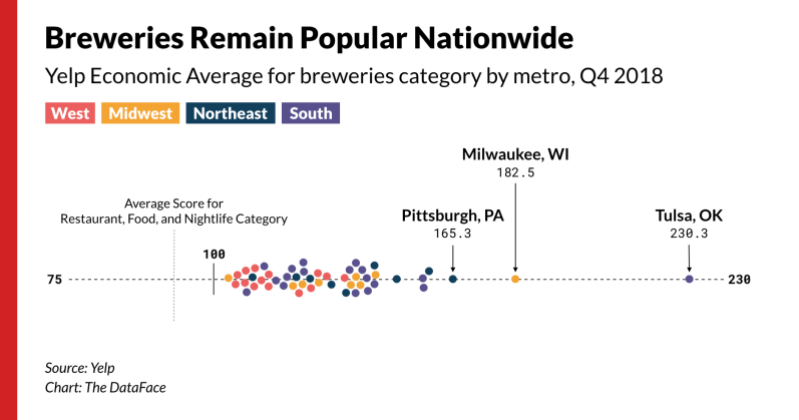 Above: Breweries are seeing an uplift in popularity, according to Yelp.

One bright spot? Brunch and brews. Yelp says that the breakfast and brunch category is up over the last two years, and that Washington, D.C. showed particularly strong growth. Breweries — particularly craft breweries — are similarly on the rise.

“The Midwest region has consistently seen strong growth across most metros,” Bialik and Hansen said, “[while] New Orleans’ and Richmond’s economies have experienced some of the most growth in the nation since 2016 … Philadelphia [also] stands out as the most vibrant local economy in the Northeast.” 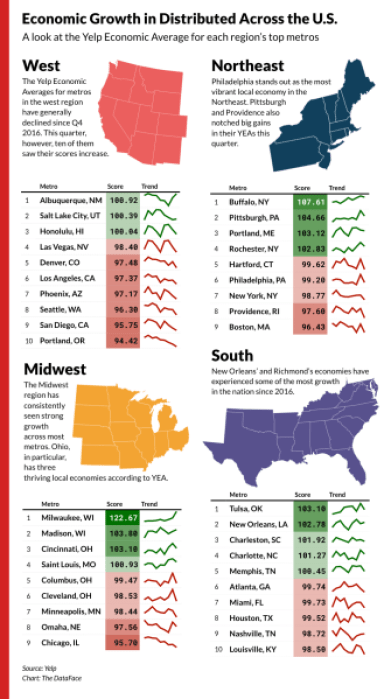 Above: The YEA by region and top metros.

More about the YEA

Yelp calculated YEA by counting the median business population and consumer interest scores for each of the 40 contributing categories on a per-quarter basis, and by counting a corresponding baseline category’s quarterly total — a root category not represented by YEA components. For consumer interest, it divided each category’s total by the baseline total to get the category’s score. Then it divided the score for the quarter of interest by the category’s score in the equivalent quarter in 2016.